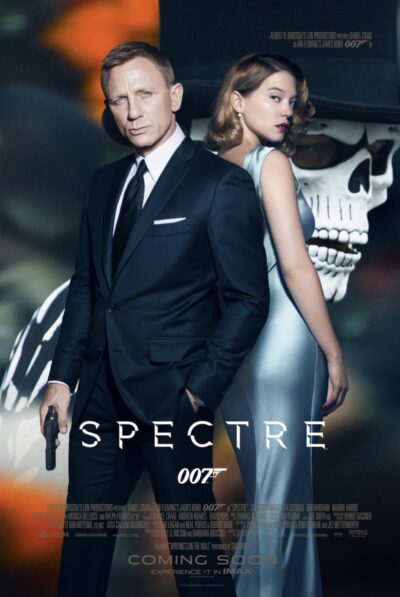 “Ciao Mickey Mouse”: 2
Mr. Hinx shoves his thumbs into Guerra’s eyes then breaks his neck
Bond throws Lorenzo off a balcony onto a table killing him

“You’re a kite dancing in a hurricane Mr. Bond”: 1
Mr. White shoots himself in the head

Ring Cycle: 1
A photo of Mr. Oberhauser is seen killed by Blofeld

“Shit”: 1
Bond wraps a rope around Mr. Hinx’s neck then kicks a bunch of barrels off the train and then attaches a rope to the barrels causing Mr. Hinx to be pulled off the train by his neck killing him

“And now we know what C stands for careless”: 6
Bond shoots 2 of Blofeld’s men
M shoots a glass ceiling which causes C to fall to his death
Bond shoots a helicopter’s engine causing it to crash killing Blofeld’s 2 pilots and Blofeld’s Right Hand Man