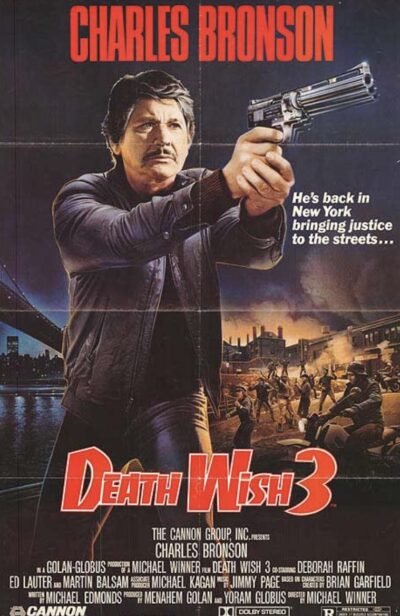 “Charley?”: 1
Hermosa, Tulio, and The Giggler beat Charley to death

Leader of the Pack: 1
Fraker stabs a thug in the throat with his pocket knife

Territories: 1
A rivaling gang member is killed offscreen with an axe by 1 of Fraker’s thugs

Lying in Wait: 1
Fraker, Tulio, The Giggler and another thug rape and kill Maria offscreen

“They killed the Giggler!”: 1
Paul shoots The Giggler in the back as he runs away

Roof Fight: 2
Paul chops a thug in the throat, killing him
Paul throws a thug off the roof

“It’s your wife. She’s dying”: 1
Emil’s wife is seen with her throat cut by Fraker

Retribution: 2
Fraker and Tulio push Kathryn’s car into incoming traffic with her in and it explodes, killing her and another driver

The War Zone: 52
Paul mows down 20 thugs with his machine gun
Paul shoots 5 thugs in a car
A civilian is set on fire and shot by thugs
Paul shoots 4 thugs
A civilian jumps off a burning apartment building to his death
A cop is shot by thugs
2 thugs are shot by cops
Paul shoots 3 would-be rapists
Fraker and his gang gun down 2 cops
4 thugs are shot by neighborhood residents
Fraker shoots 2 civilians set on fire
Another thug is shot by a cop
A thug is killed by Paul’s knife-board trap (Paul’s kill)
Rodriguez shoots Tulio out of a window
Paul shoots 4 more thugs

Bulletproof: 1
Paul blows Fraker out of his apartment with a rocket launcher