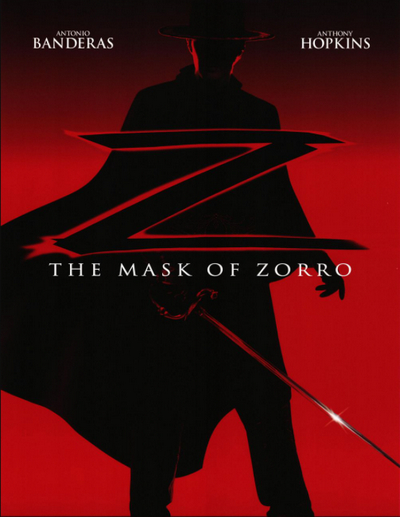 The Mask Of Zorro rights held by Amblin Entertainment and Sony.

The Mask of Zorro (1998) Body Count Breakdown by Longuecarabine

“I am Zorro”: 2
A Spanish guard throws an old prisoner headfirst into a wall killing him
Diego strangles a Spanish guard and crushes his throat with his bare hand

“Zorro! The legend has returned!”: 5
Zorro II after kicking Tornado and causing him to go out of control kicks 2 Spanish soldiers into a wall killing them
Zorro II cuts down a Spanish soldier with a knife
Zorro II hits The Big Spanish Soldier in the face and jaw with cannonballs killing him
Zorro II throws a torch which unintentionally lights a trail of gunpowder that causes it to ignite and explode which blows up a Spanish soldier he knocked out earlier

Horse Chase: 1
Zorro II throws a Spanish soldier off his horse and down a cliff to his death