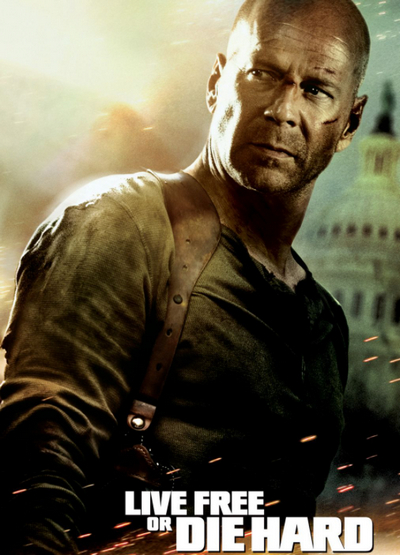 Opening: 2
Clay accidentally detonates a bomb planted by Rand, blowing up himself and his friend

“Jesus, is the circus in town?”: 3
John rolls a fire extinguisher down the hallway and shoots it, blowing one of Rand’s men out the window
John pulls one of Rand’s men through the door and breaks his neck
John shoots a Terminator collectible figure that falls onto the delete key, detonating Rand’s bomb and blowing up one of Rand’s men in the room (Shared)

“I was out of bullets”: 12
Del shoots three FBI agents including Agent Johnson
John runs over a fire hydrant which releases a jet of water that knocks Del out of the helicopter, causing him to fall to his death
Gabriel reroutes traffic into the tunnel and shuts off the lights, causing six cars and a truck to crash killing their drivers
John drives his car at Rand’s helicopter, blowing up the pilot

Cleaning: 4
One of Gabriel’s men shoots four hackers including Casper

“I’m on the third floor… and I’m coming to get you”: 1
John throws Russo down a flight of stairs, beats his head offscreen and finishes him off by shooting him

“Damn hamster”: 1
John kicks a switch, causing Rand’s arms to be frozen and he falls into the turbine, shredding him to pieces