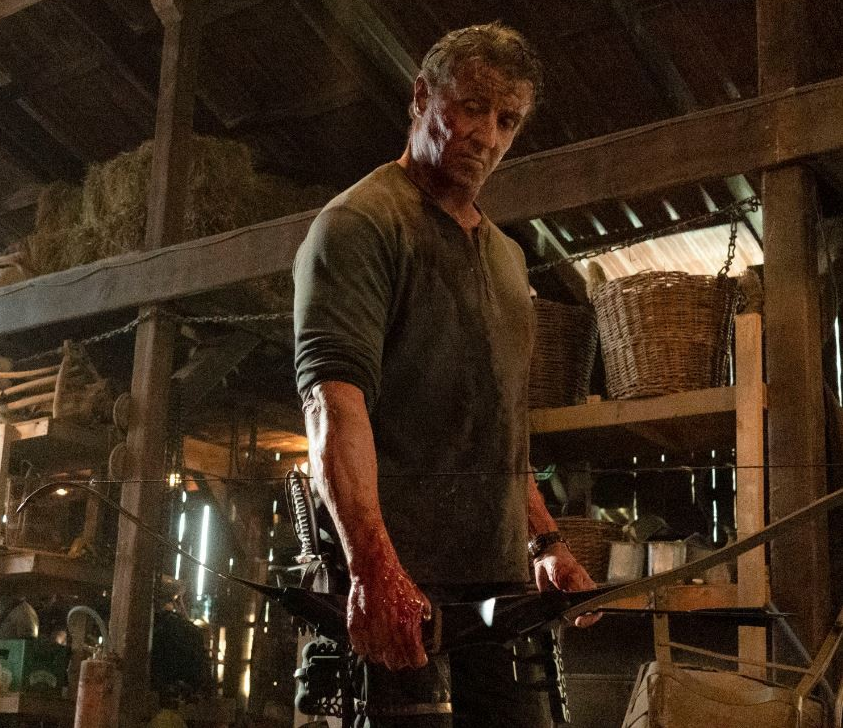 Rambo is old.  He literally sits in a rocking chair in a couple of instances.  But that doesn’t mean he’s not still incredibly dangerous.  Stallone portrays Rambo as a bit meaner and more word-weary than we’ve seen him previously.  But perhaps more importantly, we get to see him do something that the character has never done before: be afraid for someone else.  He holds onto the hope his “niece” character represents, and after she’s gone he turns jet black and frightening.  He goes from friendly cowboy grandpa at the start to a snarling, blood-soaked murder machine by the end. 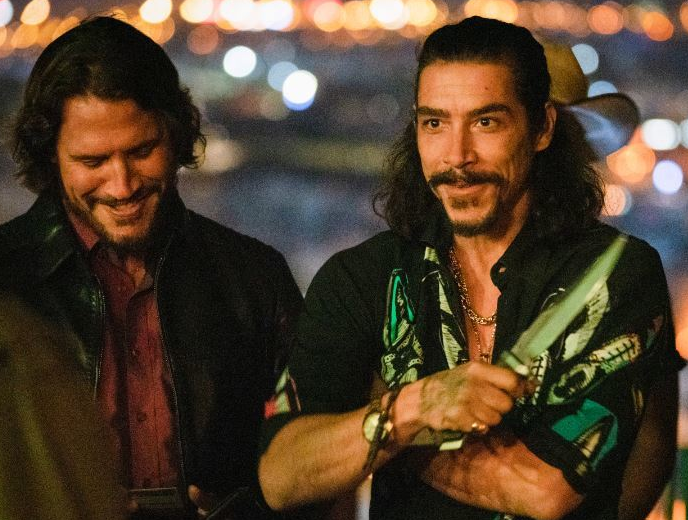 Yes, Stallone wrote villains named Victor and Hugo.  But that’s about as deep as this gets.  Victor is more of the hothead of the two, with a penchant for carving a big letter “V” into the faces of those who cross him.  Hugo is more of the guy in charge, but both are written to be about as evil and one-dimensional as a cartoon baddie.  Just so you know they deserve everything coming to them.

The sex is rape and the violence is… horrific.  Look, the Rambo films have always had a focus on violence inflicted upon the flesh.  But I think the fifth film will test the mettle of most action fans and their ability to witness such deeds visited on other humans.  We see people shot, chopped, burned, blown into bits, and impaled in an absolutely awe-inspiring number of ways.  It’s as if Stallone only learned one lesson from the fourth installment: shock ’em with gore.

And honestly, if it were just a gory film, I think we’d all give this movie an easy pass.  I think this movie will be criticized for its treatment of its female characters, and probably rightfully so.  Women have never had much of a place in Rambo’s ultraviolent world, and Last Blood is the opposite of an exception.  The women (and due to its setting, mostly women of color) cower in the face of violence and oppression, waiting with bruised and battered bodies, tears in their eyes, for an old white man to save them.

This is probably the lowest bodycount in a Rambo film since First Blood, but don’t let that fool you.  Last Blood goes for quality over quantity.  As mentioned above, this is one violent movie.  When people’s heads start being blasted apart from close range shotguns and some of the most lethal traps this side of Home Alone, you cannot help but wince.  If you like your film violence bloody, this may be the year’s best!

Rambo vs Sex Trafficking Cartel in the tunnels

Rambo has a series of tunnels built around his ranch.  He also has a decent number of traps set up for his would-be killers.  Think of Skyfall.  Think of medieval torture devices.  Mix those with the horrifying death and gore of the Saw films, and you get the idea.  It’s totally brutal and amazing.

Rambo has lost everything that means anything to him.  And he hopes to visit that pain upon his foes in a more literal sense:

“I’m going to cut him open and tear out his heart, so he knows how it feels!”

Mother Figure of deceased girl: “I’m going to be sad until the day I die.”

There was always a question of whether or not the Rambo films could make it in the modern world.  Popular politics change.  Audience tastes change.  But Rambo?  What even is Rambo anymore, but the poster-child of a long-forgotten film genre?  In today’s comic book-focused world, where CGI is king and political correctness is the law of the land, how can a 70 year old white man be a hero?

Well, Last Blood firmly wears its old style on its sleeve.  There are many callbacks to “the old way” seen throughout.  Rambo wears the stylings of a cowboy through much of the early parts of the film, signalling his Western origins.  But he’s also seen constantly working.  A busybody of few words.  He’s an old-fashioned man with an old woman on one side of him and a young girl on the other.  He doesn’t seem to fit anywhere, but he’s made a place for himself here.  And he wants us to believe it’s home.  But we all know better.

Like Paul Kersey, John Rambo can never know true peace.  Conflict of outrageous proportion will always find him.  And this time, when it does, Rambo gets to get dirty.  Few movies in the mainstream get to reach the vile depths of this one, which is both a strength and a weakness for the fifth entry of this series.  It’s a strength because, as a legacy genre character, Rambo is uniquely qualified to dish out the level of violence on display here.  But it’s a weakness in that it feels like over-tread territory.

Back when Taken came out, I commented on how the film was springboarding off the success of Sylvester Stallone’s then-recent successes with Rocky Balboa and Rambo.  And similar to how I felt watching the ant scene in Indiana Jones and the Kingdom of the Crystal Skull rip off the scarab bits from The Mummy, it’s just an odd thing to see Last Blood take the broader plot points of Taken and fuse them together with bits from Skyfall and more.  I feel like the Rambo films should be above that sort of genre cannibalism.

If Rambo is to get in the middle of a sex trafficking story, it almost feels like they should have taken notes from Dolph Lundgren’s B-movie action extravaganza, Skin Trade.  There could at least be some fun had in that sort of thing.  But instead, the movie is bogged down in some truly despicable and depressing scenarios.  Mind you, this is entirely subjective.  And I can see how this is something of a natural progression from the gritty fourth film.

When Rambo III came out, Guinness Book of World Records called it the most violent movie ever made.  Stallone, perhaps burned by the critical non-success of that entry, clearly took note.  Which brings us to Last Blood.  How does this series continue in the modern world?  By making it pack a wet, meaty punch of sadistic violence.  I remember watching the fourth film in the theaters and having to look away when a small child was tossed into a raging fire.  I love my movies violent, and even I couldn’t deal with that.  This movie takes that level of barbarity and uses it almost exclusively against its one-dimensional villains.  And honestly, the movie is probably better for it.

So I’m not saying the movie is awful.  It has some old-fashioned problems, what with its easily hijackable social leanings and dim view of life outside the rural American homestead.  But it’s still fairly gripping, and Sly has spent enough time thinking of cinematic ways to kill people to make the entire climax play like gangbusters.  But this is kind of a bittersweet viewing for me.  Rambo was not my favorite of the cheeseburger death machine action flicks of the 80s, but he was the face of them.  I just feel he could have ended on a more poignant note than blood-soaked bad-assery.  I’m reminded of a quote from Col. Trautman in the first film:

“However he may have ended up, there was a time when he was very special.”

Don’t be a sex trafficker.