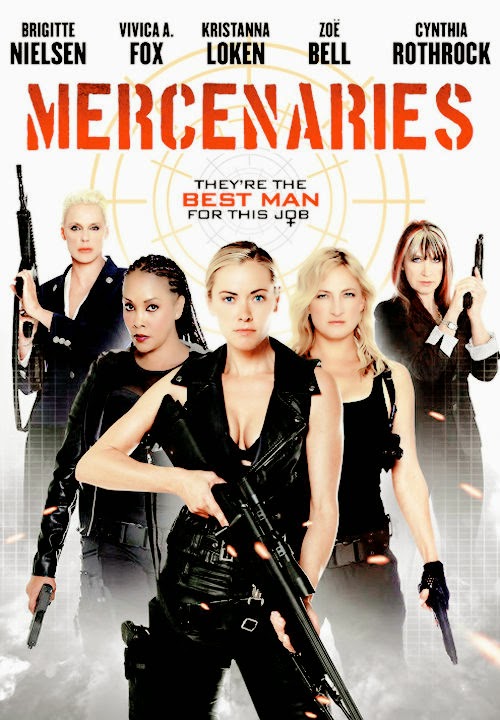 The Asylum, the film studio responsible for such films as The Day The Earth Stopped and Transmorphers has built a fairly successful business model producing “mockbusters.”  Mockbusters are described as  usually low-budgeted films meant to capitalize on the marketing of major studio releases and ignorant filmgoers.  I can see this working, too.  I once worked at a video store.  More often than even I’d like to admit, customers would come in and not have any real clue as to what the title of the film was they were looking for.  Someone looking for, say, Transformers might call it “Trans-Robots” or “Change-bots.”  Transmorphers is sure to get plenty of hits just from those people alone.  Add to that the fact these studios are only making and remaking these kinds of nonsense films because of what they perceive as some kind of name recognition factor, and The Asylum’s business model almost smacks of a certain kind of brilliance.

Sure, the film fan and quality control part of my brain knows this is a special kind of evil.  I accept that.  But the schadenfreude I feel here is too strong.  So when I heard The Asylum was making a version of The Expendables, I was fairly pleased.  Here they were making one of these knock-offs of a film I actually enjoyed, albeit about four years too late.  It turns out, however, this film is more to do with the ongoing concept of an Expendables spin-off, featuring a cast of entirely female Expendable characters, currently going under the title The Expendabelles.

Mercenaries concerns the attempts of a group of four female convicts hired by the C.I.A. to rescue the President’s kidnapped daughter in exchange for full pardons of their past crimes.  Women kicking ass ensues.

Zoë Bell is one of those women who really deserve better than she’s gotten as far as headlining a movie.  She’s got a gruff physicality that easily lends credence to playing tough types and a certain amount of grace and vulnerability that would make for an interesting lead.  While Bell’s character here isn’t the deepest of written characters, she is the deepest of this particular film, and when allowed to soar (even through this movie’s miniscule budget), Bell makes it work.  Ditching her natural New Zealand accent, Zoë becomes the group’s de facto leader, a hard and resourceful woman, strong and sarcastic, with excellent fighting skills. 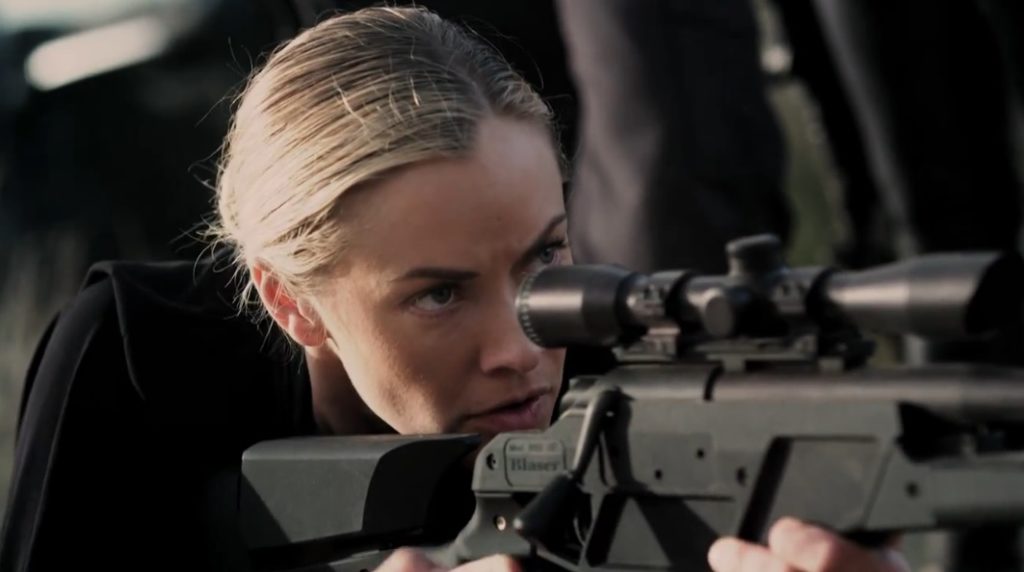 Loken will likely always be remembered as the T-X from Terminator 2: Rise Of The Machines, and that’s kind of too bad because she’s a good presence and works well in an Action setting.  Though this role is largely a waste of her talents, I’d say it does benefit the film to have her piercing gaze.  It’s fun to have someone as expressive as Loken play the team sniper and resident tough member.

Bilderback plays the team’s explosives expert and token Asian team member.  I can’t say I know Nicole Bilderback from much else, and she’s nearly a non-presence here, but does what she can.  She’s far more jokey than any of the other team members, and gets some truly cringeworthy dialog.

Fox here does well in the sort of genre film she was born to be in.  Like her character in Kill Bill, Fox is a former hitwoman, as lethal with your back facing her or away from her.  Fox seems to be having fun here, and if this is really an Expendables mockbuster, then she is Mercenaries‘s Dolph Lundgren. 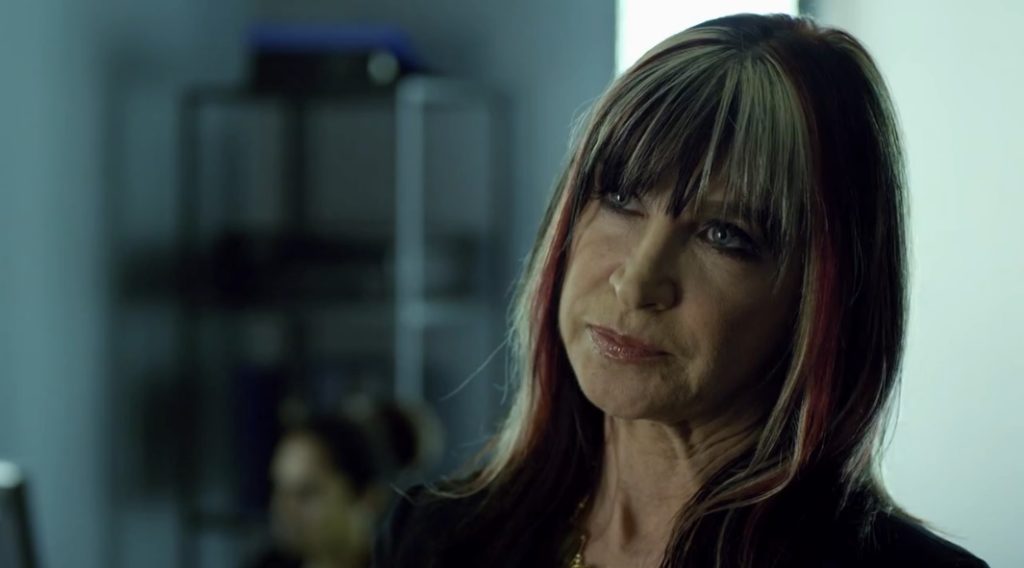 Ah, it’s always nice to see Rothrock pop up in these kinds of flicks, even if she’s still dying her hair in a million different colors.  She’s never had the best or strongest presence, but Cynthia’s more than earned her pedigree.  I might not believe her character is the ass-kicking C.I.A. chief she plays, but I definitely know and believe Rothrock is a bad-ass. 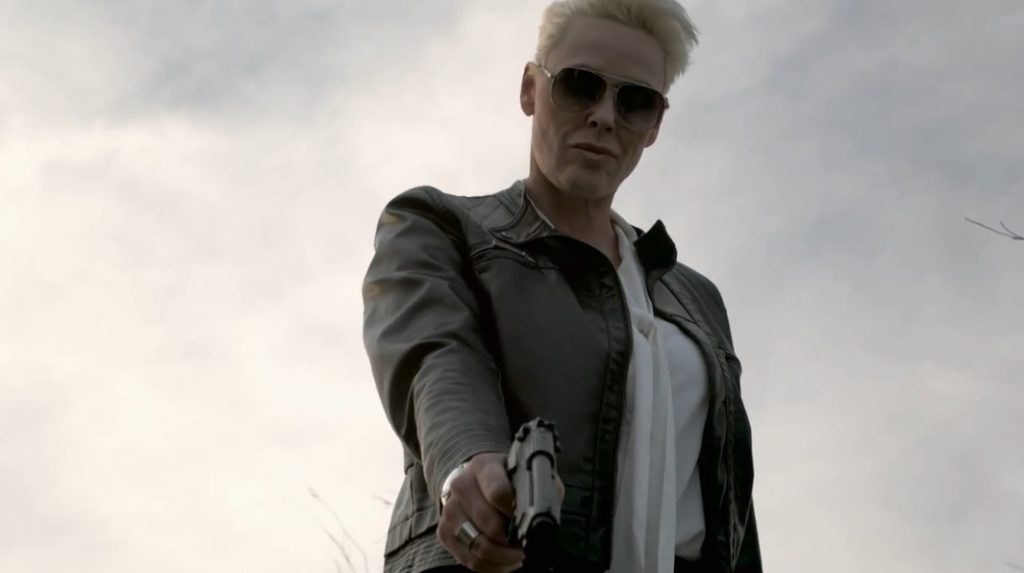 I really don’t know what to say about Brigitte Nielsen.  I mean, have any of you seen Flava Of Love?  So I’m just going to try and talk a bit about Ulrika.  Rothrock’s character refers to her as an “Amazonian she-bitch”, and that’s about as apt a description as any.  She’s a man-hating, woman-eating monster of a character.  Ulrika’s as close to making this movie feel like the film it wants to be, too.  I can’t tell if it’s because Nielsen’s picked up some key acting pointers over the course of her career, or if it’s because Brigitte’s become some sort of “it” creature, almost unreal, and so fiercely unapolotic enough that it translates to the screen.  She’s genuinely scary, and feels like a real threat, something her lackeys are all seriously… um, lacking. 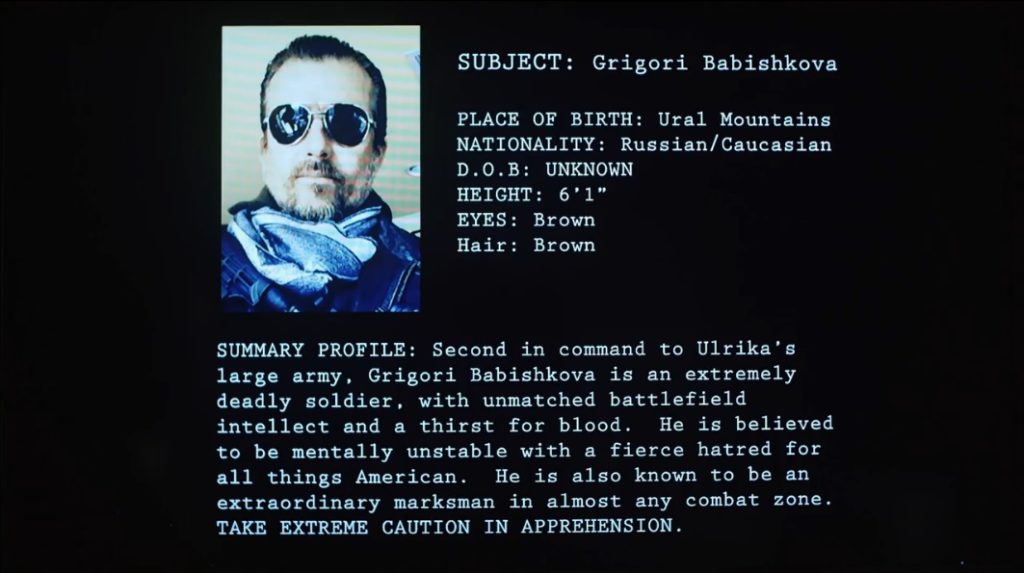 He’s Ulrika’s right hand weirdo, a mass rapist and all around filthy pile of two-legged scum.  The film helpfully fills out his backstory with this slide.

Free to make their films without fear of censorship, The Asylum have the power to make some of the most truly violent and sexualized flicks ever made.  I mean, they put a lesbian subplot in their Transformers knock-off. 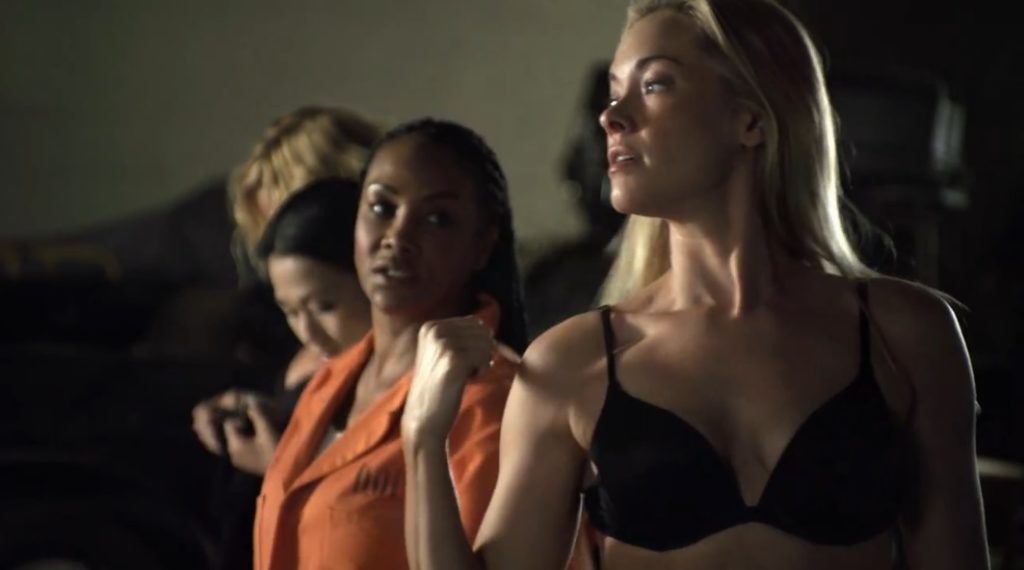 That’s why I am astounded at no just how little death there is in Mercenaries, but how this movie completely dodges most films of this type’s innate urge to exploit the female aspect.  No shower scenes?  No shirtless fights in the mud?  The Hell, you say!  But it’s true.  This is, perhaps by accident, one of the most progressive Action films I’ve ever seen.  It even passes the Bechdel test.  The shot above is about as close as you’ll get, wherein Kristanna Loken feigns asking Vivica A. Fox for help undoing her bra, a scene that’s (painfully) played for laughs.

Still, we get plenty of bloodshed when people get shot.  They didn’t squelch on squibs (though there are also some awful CGI blood bits).

Mercenaries is confounding at times.  It’s less Charlie’s Angels than it is The Dirty Dozen, but definitely of less quality than either.  I might prefer to watch this over either of the McG-directed Charlie’s Angels films, but that’s really not saying much.  But in this cheap and often bland experience, we do get some good things for our time. 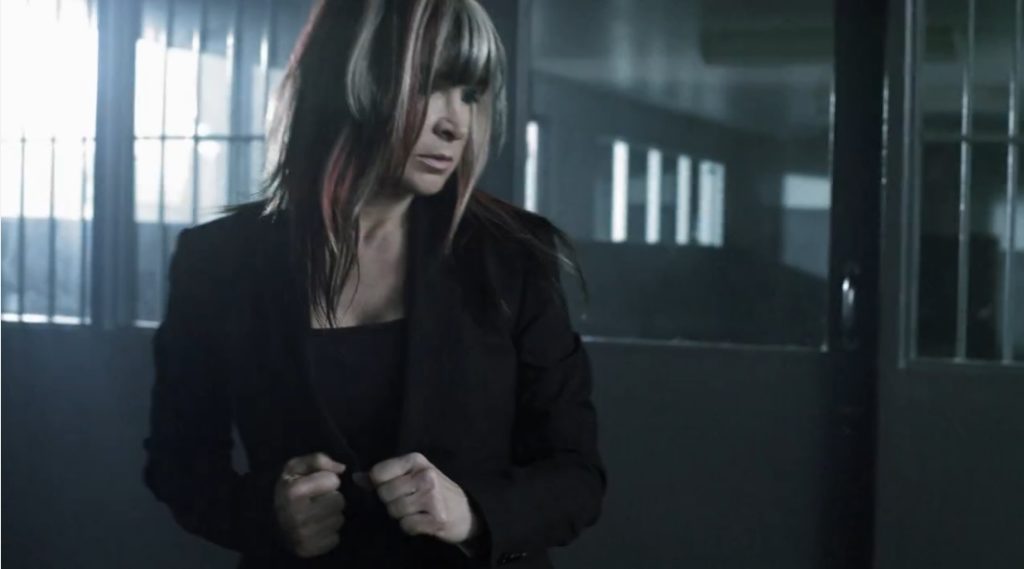 Cynthia Rothrock fights Vivica A. Fox.  No, it’s nowhere near as good as the Bride/Vernita Green fight from Kill Bill, but it’s a nice reminder that Cynthia’s still got it.  Plus, when you think of this movie in Expendables knock-off terms, you’ll soon realize Bruce Willis and Arnold Schwarzenegger didn’t do much of anything in their short cameos in that film.  Cynthia’s got the boys beat in that area.  Ball’s in your court, Expendabelles.

Also worthy of note is a great shooting-while falling bit from Zoë Bell, who also gets another bad-ass moment of her own.  After battling about a dozen guys in some intense slow-motion hand-to-hand combat, a huge dude with a machine gun in both hands steps into frame, screaming maniacally.  Zoë, nearly out of breath from fighting the others, says,

And blows his brains out in a single shot.

Look, no one is going into any movie from The Asylum with expectations of high art.  That Mercenaries is watchable on a basic level is an achievement, let alone any kind of enjoyable.  But I’ll say it: I kind of liked it. 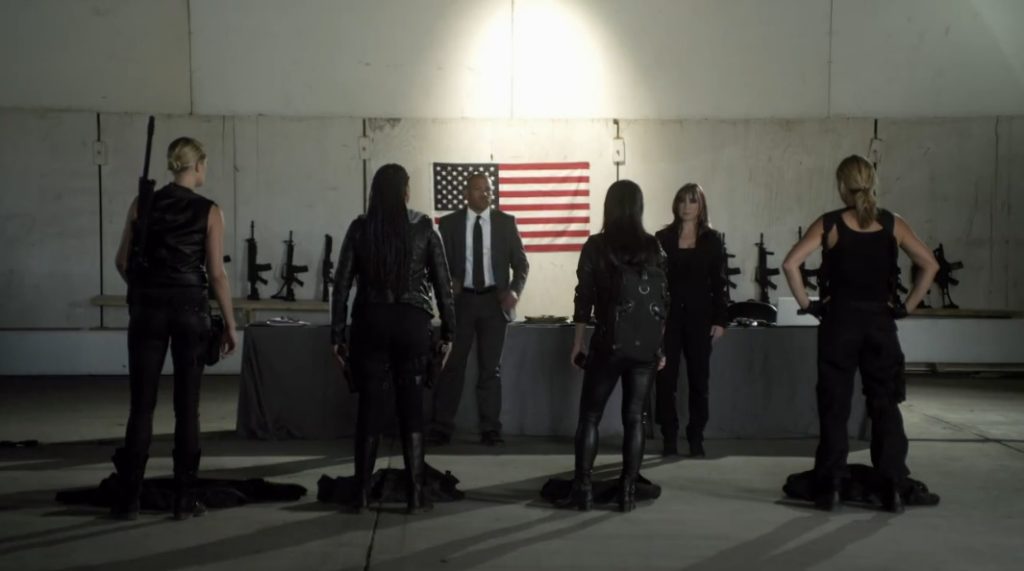 Oh, it is as cheap-looking and completely lacking in any kind of style as you would expect, but it delivers exactly what it advertises.  It’s a silly little Action movie that happens to be about women bad-asses fighting a crazy woman warlord.  It’s generic, but it works.  And quite honestly, I think the guys over at The Asylum should be proud of what they’ve accomplished here.  Had they gave it a little more polish, and maybe a bit more of a budget, it really could have been something awesome and memorable.  But I don’t like looking at movies for what they’re not.  Not really.

At times, Mercenaries feels like it’s truly attempting to reach beyond its limited scale.  There’s an entire fight sequence set in the back of a cargo plane and a crash landing.  In a big budget film, the CGI used here would be jarring, but it doesn’t phase me here.  Instead, I was kind of surprised they bothered using any computer graphics. 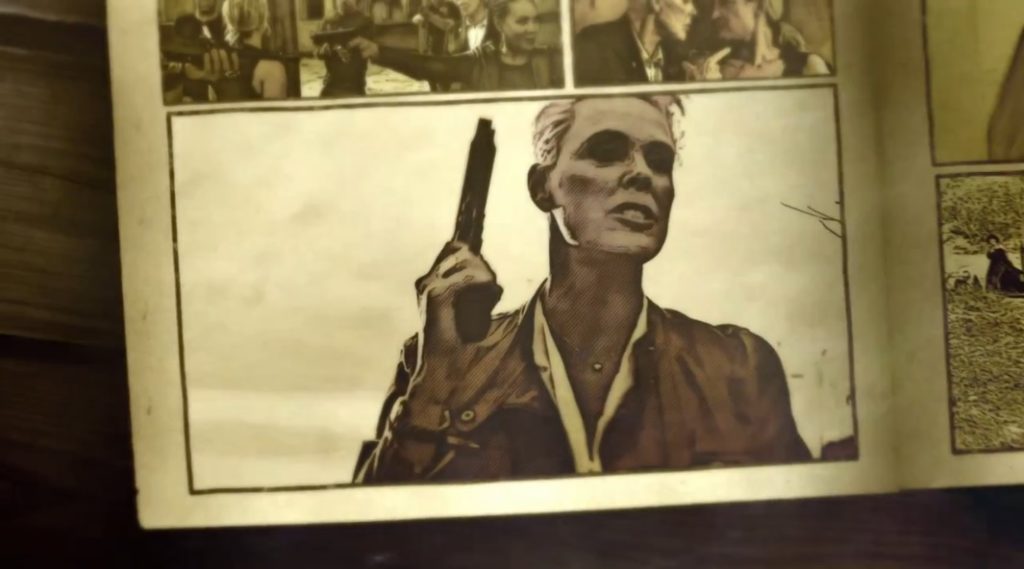 In between scenes, they occasionally change the color tone to sepia, and go into a comic book style, using panels and everything.  The pictures are random and the effect is a bit forced, but I’m glad to see the creators had some ambition here.  During Zoë Bell’s standalone one versus man fight sequence, there is a lot of slow motion intermingled with quick cuts that almost feels like the editor knew what he was doing.  It’s easily the most energetic part of the movie, though I do also quite like that above-mentioned airplane battle as well.  So I’d say check this one out, if you’re one those who can be bothered to sit through DTV films.

Ensemble Action films ain’t just for men.  And at less than an hour and a half long, there are worse ways to spend your time.