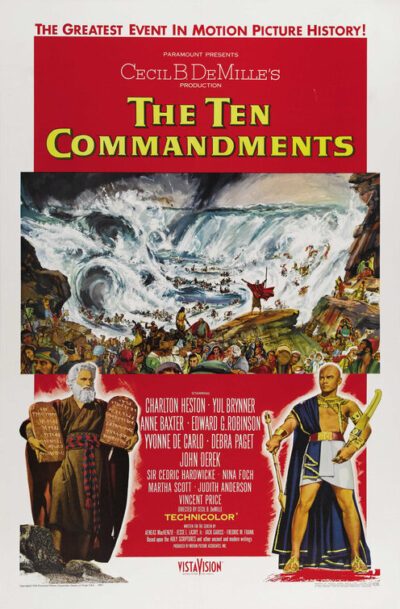 “So says Rameses I”: 1
A baby shown dead, killed by Egyptian soldiers

“No Hebrew shall sit the throne”: 1
Nefertiti pushes Memnet off the balcony

Deliverance: 1
An overseer throws an axe into the old man and he dies talking to Moses

“His God is God”: 138
God through Moses closes the Red Sea, drowning 138 Egyptian soldiers including General Pentaur (69 chariots, two in each)

“For this, you shall drink bitter waters”: 9
Moses throws the Ten Commandments at the Golden Calf, opening a fissure in the ground that swallows Dathan and three of his followers
A bolt of lightning summoned by Moses electrocutes five of Dathan’s followers

The Promised Land: 1
Moses walks into the wilderness and dies offscreen