A group of mercenaries are hired to knock over a high-tech bank and only an odd trio of police officers can stop them. 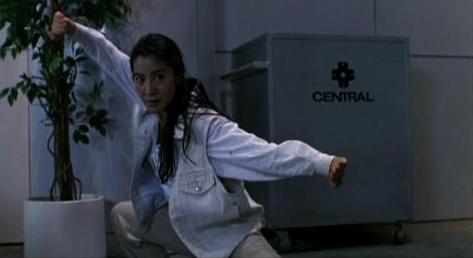 Hua is an efficient soldier, proud to serve her country and glad for what little she gets in return.  Her conflict rests in her failure to understand the capitalist intentions of her boyfriend and reconcile it with her own humble ways.  Yeoh manages to convey all this naturally and through some marvelous acting in a role that doesn’t actually demand such. 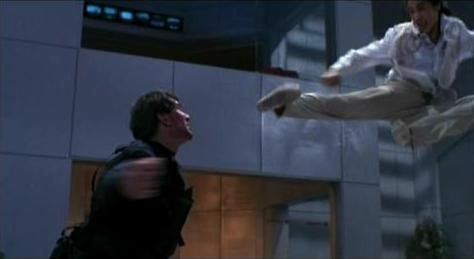 Most importantly, however, Hua is a complete bad-ass.  Through weapons, martial arts skills, flexibility and sheer persistence, she is one tough babe with the body and will to back it up.

I’m guessing they added this character because they thought the movie needed a love triangle, because that seems to be his primary purpose in the film.  Chau spends the movie being awkward around Yeoh and serves a few comedic moments throughout, but is ultimately largely forgotten by the end of the picture.  His Inspector character is a bit of a doofus, generally either messing up parts of the investigation or showing close to zero skills in combat. 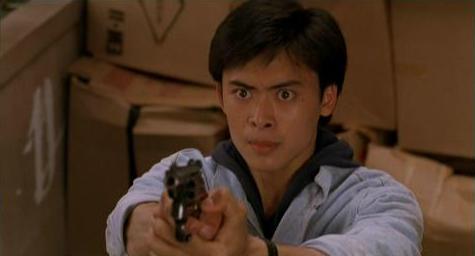 Which is why this character exists.  Apparently he’s Li Kuang Ming’s brother-in-law and also his partner.  He’s intense while on duty and extremely athletic.  While his personality and character go largely unexplored in Project S, his fighting skills are exceptional. He plays the evil gweilo for the movie, a white guy of unknown origin who designed the underground bank vault’s layout and is now seeking to knock it off.  Unsurprisingly, he’s a backstabbing bastard who pretty much betrays everyone he hires to help him pull of the job. 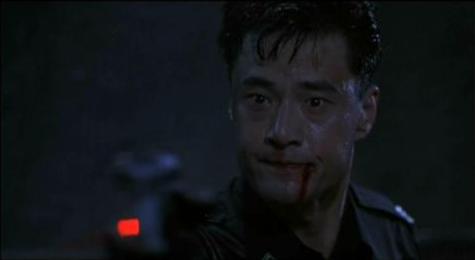 Yu plays the team leader of the mercenary group hired by Davidson.  His intent is not to become a career criminal, but to pull off one job that will enable him to become the man he thinks Yang Chien Hua deserves.  His is a confused arc, and one that technically makes him a tragic anti-hero.  Yu plays the role with perfection, the right amount of internal conflict over what he is doing and the sadness of knowing he may be disrespecting everything the woman he loves stands for.

Our team of mercs are viciously loyal to one another, but aside from the few pats on the back and whatnot, there ain’t much of a story to tell here.  Michelle Yeoh, on the other hand, loves checking out other chicks, be it in magazines or airports.  But more on that later.

Yeoh’s films are typically progressive in the way they portray women.  Of the two women prominently displayed in Project S (Michelle Yeoh and Athena Chu, who plays Rongguang Yu’s sister), both show a certain amount authority or power over their male peers and a good amount of independence as well.

Lots and lots of people are shot to death or blown up in this one.  One guy is even shot and then blown up.  But the thirty deaths I counted are a minimum.  There were a couple scenes with people getting shot or shot at and I couldn’t tell if it was fatal or not.  Strangely, in all this carnage Michelle Yeoh only shoots one person.  She did it with style though.

While I think Yang’s final confrontation of Cheng is probably the film’s intended big moment, I’d say my own favorite would have to be the fight between Michelle Yeoh and some giant white guy apparently named “Big Yank.” 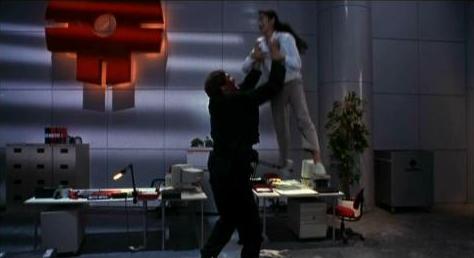 What I like about this battle is the David and Goliath-like visual it has.  Yeoh is absolutely minuscule compared to this guy, unable to even hit him in the face until she jumps onto a table.  It’s pretty much as close as the movie gets to matching the tone of the Police Story series which, while somewhat sad, allows this particular fight to be a memorable one.

While actually very scant as far as quotable dialog is concerned, I suppose I did find humor in Michelle Yeoh’s character continually poking fun at Emil Chau’s character.  When he is sent to pick her up from the airport, he’s only given the description that she’s “beautiful.”  He wanders about the airport, almost completely ignoring Yeoh and asking a beautiful woman in red if she is who he’s looking for, but eventually spots Yeoh.  When asked why he didn’t notice her, Chau responds that he only had that scant bit of information to go on.  Yeoh glances at the earlier woman in red and says, “You have good taste.” 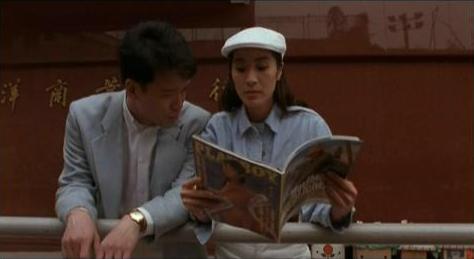 Later, when trying to look inconspicuous, Chau grabs a random magazine from a magazine rack, which turns out to be a Playboy.  Much to Chau’s chagrin, Yeoh takes the magazine from him and repeats the line.

For the most part, I’d say Project S doesn’t quite suffice.  It’s like they didn’t quite put enough thought into the concept before executing it.  It feels a bit like a script for another movie was just submitted, changed but slightly to allow more focus on Michelle Yeoh instead of another character (in fact, there seems to be four main characters), and then shot without thinking too much about emphasizing what made Yeoh work as an action star in Police Story III.  Many of the best fight scenes and stunts are performed by Rongguang Yu’s character.  In fact, the movie could have very easily been about him. 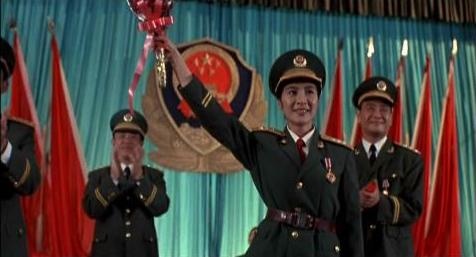 The story follows Michelle Yeoh, a Chinese officer and counter-terrorism agent who is sent to Hong Kong to assist in a police operation.  As it turns out, her former lover is one of the mercenaries/criminals, a faction of former military men being hired to be the muscle in a high scale bank robbery.  Her ex, portrayed by Rongguang Yu, is actually heading out most of the operations so he can return to mainland China a rich man, marry Yeoh, and take her with him to the United States.

Directed by Stanley Tong, who also directed Police Story III, IV, and Rumble In The Bronx.  It’s surprising that much of the charm inherent in his collaborations with Jackie is absent here.  Not nearly enough comedy to make this a light-hearted action romp, and yet not quite enough drama to be anything but, the movie instead lands at an uncomfortable middle area.  While certainly serviceable at times with some inventive action sequences and a few vertigo-inducing stunts, much of the film is spent with the main characters awkwardly socializing or just aimlessly walking about, talking about clues in their case.  That being said, I wouldn’t say to steer clear (though this is yet another example of a movie that needs to be seen in its original version) as when it gets going it really works. An action sequence set in an abandoned building sets the tone quite well, and a streetside shootout between the police and our mercenary semi-leads is reminiscent of Heat, which was actually made two years later.  Probably the most impressive bit is the climax of the film, taking place across the confines of an underground bank vault through to an empty subway tunnel system.  There’s plenty of shooting and fighting for everyone to leave this experience happy.  Add to that the scattered remnants of some of the score from various Hollywood movies (including some incidental music from Aliens), and you’ve got something that’s at least interesting if not fun.

Yeoh continues a career of playing strong, independent women, written with moral complexity and depth of character.  Her character of Yang Chien Hua starts the film sure of wanting nothing but the humble life she already leads and grows to have real conflict between her duties to the State and the wishes of her former lover.  It’s a bit surprising to see this sort of character/story arc in a Chinese film at all, let alone what on the surface appears to be a simple Action movie.  This is one of the things that always set Yeoh ahead of her peers when it came to the content of her films.  Still, they do manage to nearly undermine all this by putting so much focus on the other characters. 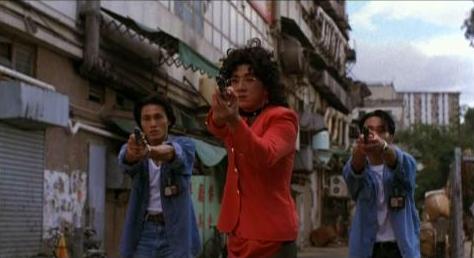 As this is a spin-off of Jackie Chan’s successful Police Story franchise, we do get an extended cameo from Bill Tung and a short, comedic fight sequence from Chan himself.  It’s not a bad scene, but I think that given the rest of the film’s overall tone it sort of feels out of place and might as well have been in a different movie.  In fact, Michelle Yeoh isn’t anywhere near the place this sequence takes place, giving it the feel of another movie anyway.

So as far as recommending this to anyone goes, I’d say to check it out.  The Supercop 2 version is dubbed and goes from decent to horrible, but remains largely intact from it’s original source.  You’re generally not missing out on much, but it’s worth tracking down the original, especially if you’re already a Michelle Yeoh fan.

Crime doesn’t pay, even if you think you’re doing it for the right reasons.