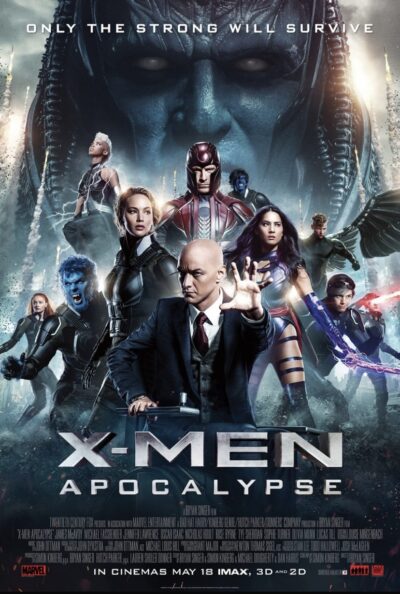 East Berlin: 1
The Blob dies from his wounds inflicted by Angel

“Is someone going to take you away?”: 1
A photo of Jakob Lehnsherr is seen killed by Nazi’s

Apocalypse Lives: 6
Apocalypse uses his powers to cause a shockwave that causes rubble to crush 6 cultists

“I could feel all this death”: 2
Apocalypse uses his powers to burn 2 civilians alive

“Is this what you want from me?! Is this what I am?”: 12
A policeman accidentally shoots Magda and Nina Gursky with an arrow
Erik uses his powers to cut Jakob and 9 policemen’s throats with a locket

Factory: 12
Apocalypse uses his powers to drop Milosz and 11 steelworkers into the ground killing them

“Wreak Havok”: 4
Apocalypse whilst controlling Professor X makes him take control of a submarine gunner to launch a missile at a submarine blowing up a commander, pilot and gunner (Shared)
Havok unintentionally shoots The Blackbird’s engine with an energy blast accidentally blowing himself up