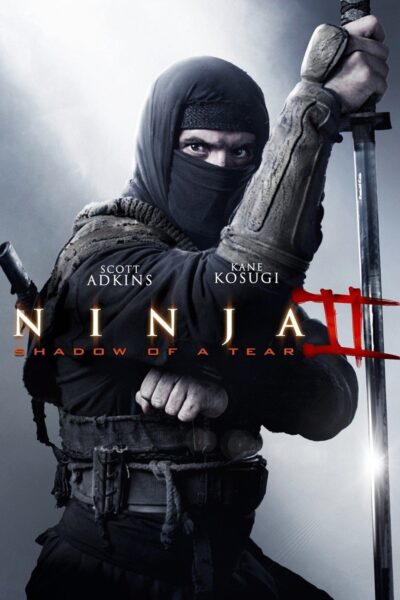 Ninja: Shadow Of A Tear (2013) Body Count Breakdown by Nomoredogsleft94

Tragedy: 1
-Namiko is seen dead, later revealed to have had been strangled to death with the barbed manriki whip by Nakabara off-screen.

“I have a long memory”: 1
-Goro wraps his spiked whip around one of his men’s neck then strangles him to death with it.

“Are you ready to die. Neither was she!”: 2
-Casey stabs one of the street thugs in the stomach then kicks him down where he bleeds out off-screen
-Casey slices off the last of the street thug’s hands off then throws a shuriken into his back, finishing him off by slicing his throat open.

Deadly Picking: 1
-Lucas is strangled to death with a barbed manriki whip by an unknown assailant, later revealed to have been Nakabara.

Crack Ninja: 1
-Casey stabs the Drug Dealer with his own knife then slashes his throat open.

Escape: 1
-General Sung is seen dead, stabbed in the heart with a pair of scissors by Casey off-screen.

Infiltrating the Complex: 14
-Casey shoots a poisoned dart into a guard’s neck, causing him to fall off the roof.
-Casey slices two guards to death with his kusarigamas.
-Casey places an unpinned grenade on top of a set of gas canisters that is next to a guard outpost with 8 guards inside, blowing them up.
-Casey slashes and stabs a guard to death with his kusarigamas then throws one into another guard.
-Casey killer kicks a guard in the head, cracking his neck (the sound effect seems to imply a neck cracking).

Fighting Among the Flames: 4
-Casey cuts down 2 guards with his katana.
-Casey grabs Myat’s leg as he tries going in for a kick then stabs and slices it open, slashes him across the stomach, stabs him in the heart then finishes him off via a neck breaking.
-Casey decapitates Goro with his katana.

Room of Relics: 1
-Casey strangles Nakabara to death with his own barbed manriki whip.

-Sensei Takeda is mentioned to have killed Goro’s brother in a duel
-Casey brutally beats up several of the Drug Dealer’s men, delivering a near lethal kick to one’s head and karate chopping another’s throat but they’re all shown on the ground writhing in pain at the end of the scene
-Casey decapitates a cobra with the WW2 era katana