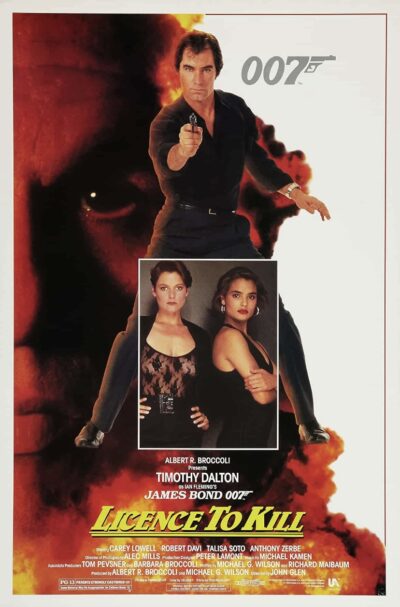 “Give her his heart”: 2
Perez strangles Alvarez’s bodyguard with a garrotte wire
Dario cuts out Alvarez’s heart with a knife offscreen

Escape: 1
Killifer hits a DEA agent in the head with a shotgun and then drives a truck off a bridge into the sea drowning him

“Compliments of Sharkey”: 4
Sharkey’s body is seen killed by Clive
Bond shoots Clive with a speargun
Bond pulls off one of Krest’s men’s mask and hits him in the face with a spear gun causing him to drown in the sea
Bond pulls an emergency door release on a plane door causing one of Sanchez’s men to fall into the sea to his death

“Launder it”: 1
Sanchez ramps up the pressure in the decompression chamber then cuts the line with an axe causing Milton Krest’s head to inflate and explode

“Switch the bloody machine off!”: 1
Bond pulls Dario into a cocaine grinder shredding him to pieces

Dead End: 1
Colonel Heller’s body is seen impaled on a forklift by Braun