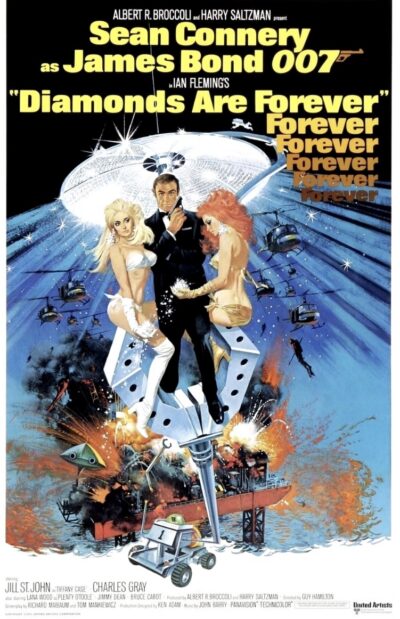 “Welcome to hell Blofeld”: 3
Bond pulls a chain which causes one of Blofeld’s men to be sprayed with mud suffocating and drowning him in a mud bath
Bond throws scalpels into one of Blofeld’s men’s chest
Bond straps down one of Blofeld’s doubles to a gurney then pushes it away causing him to fall into hot mud and Bond turns the temperature up to the highest setting burning him alive

Desert: 3
Mr. Wint puts a scorpion down Dr. Tynan’s back which stings him in the back with it’s poisonous tail
Joe and one of his men are blown up by a bomb in their helicopter set by either Mr. Wint or Mr. Kidd (Shared)

Amsterdam canal: 1
Mrs. Whistler’s body is seen drowned by either Mr. Wint or Mr. Kidd in the canal (Shared)

Apartment building: 1
Bond hits Peter Franks in the back with a fire extinguisher causing him to fall off a railing to his death

“Why is my black wig in the pool?”: 1
Plenty O’Toole’s body is seen drowned by either Mr. Wint or Mr. Kidd in a pool when they tied her to a cement block and pushed her in (Shared)

The Whyte House: 1
Bond shoots one of Blofeld’s Double’s in the head with a piton from his grapple gun

“Well he certainly left with his tails between his legs”: 2
Bond smashes a Courvoisier bottle and throws Cognac at some burning kebabs causing Mr. Kidd to be set on fire burning him alive
Bond attaches Mr. Kidd’s bomb to Mr. Wint and throws him off the boat blowing him up (Shared)