When a D.E.A. agent’s partner is killed, he decides to find his own justice.  Seriously, that’s about it.

Mike Ryan is an adrenaline junkie and consummate bachelor.  After his partner (and possibly lover) gets killed in a drug sting gone bad, Ryan decides that the vengeance he seeks cannot be granted to him through legal means and so goes on to take down an entire drug empire himself.  He doesn’t have a real plan or anything, just blind luck and some serious martial arts skills to back up his straightforward ways.  He’s also got what appears to be a kind of sixth sense when it comes to his imminent demise.  If someone has the drop on him, he instantly flips or rolls out of the way before they fire off a shot or land the killing blow.  While not fair to the other guys, it certainly increases his ability to overcome any and all foes. 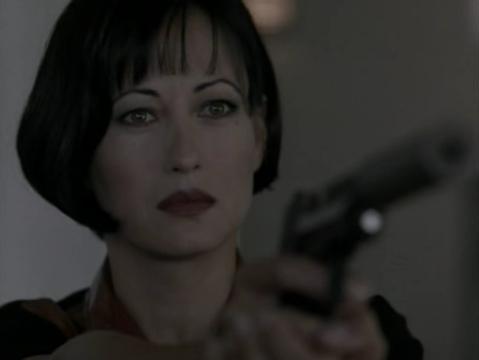 At some point it is revealed that Jade actually works for Victor Chow.  Now, I’m not sure what her job description was, but it seemed to be some sort of whore/pimp relationship… and maybe even something weirder.  Anyhow, she’s actually some sort of forced assassin, with her child or little sister or something (I really don’t think they tell us) being held by the Elder Triads until she performs her duties.  She manages to be integral to the plot and a fairly reliable getaway car driver-type person for Mike Ryan, so I guess she’s kinda bad-ass.

Tagawa doesn’t really get to pull out all the stops with Victor Chow like in many of his other roles, but he still gets to do some things.  Chow kills lots and lots of people in increasingly brutal ways over the course of the film, making him quite the sinister baddie.  But it’s only toward the end of the film, when he’s huffing his own stuff (and forcing Jade to partake) that he really comes out as an interesting character.  He seems to have some serious abandonment issues (at a couple points literally begging people not to leave him), but sets that shit aside to go one on one against kickboxing champ Gary Daniels.  So he’s a tough fucker.

Daniels, at one point, mentions that he used to live a life of one-night stands until he met his partner.  This seems to indicate a very comfortable and awkward situation untold in the film.  This is because his partner had a wife and kid, which is normal enough, but when they go on family camping trips they bring Daniels so he and his partner can go climb mountains while the wife and kid sit back at camp in awkward silence.

Despite the small presence of the dead partner’s wife representing the usual female buzzkill, White Tiger does go to some lengths to establish Julia Nickson’s character as not only necessary to the progression of the plot, but also as a strong and formidable female character.  She’s almost the most developed character in the movie.  Of course, she still strips down and bangs Gary Daniels, so what can you say?

Plenty of people killed here, mostly by Tagawa and his goons.  Daniels does manage to slay 11 guys, but he’s the heroic type in this one, claiming not be an assassin.  The deaths are largely gunshot, but there’s also a fair amount of death by incineration here.  So if you like seeing your bad guys get toasted, White Tiger is for you.

In one of cinema’s biggest non-surprises, Julie Nickson’s Jade turns out to be working for the evil druglord, detailing Ryan’s whereabouts and doings to the baddie behind the scenes.  The real surprise comes later though, when Jade arrives to kill Victor Chow, revealing herself to actually be a double agent for the Chinese Triads Chow has recently split from. 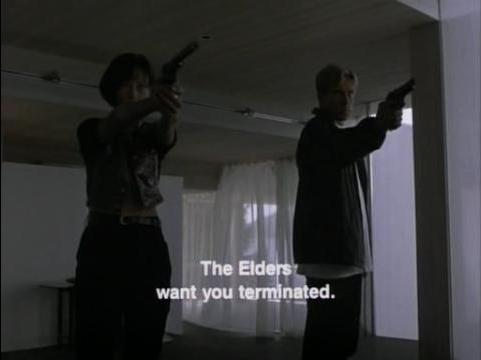 Both Ryan and Jade have a moment of doubt as to whether or not they can actually be assassins.  Jade thinks she’s been playing Ryan the whole time as well, but when he speaks Chinese, she realizes he’s been aware of the double-cross the entire time.  But their little moment is suddenly broken up when a martial artist suddenly comes flying through the air and kicks them both, beginning a close quarters combat match.  It’s so completely out of nowhere I couldn’t help but laugh out loud. 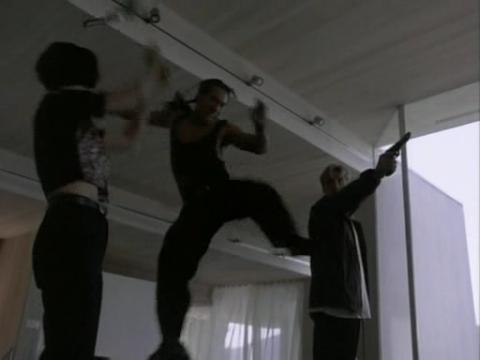 In a movie filled with many such moments, this one was easily my favorite, demonstrating that explosions and kung fu fights should always come before exposition and catharsis.

Daniels and Tagawa are battling through the drug lab as it’s being consumed by fire, slamming each other through desks and windows.  As the two struggle on top of one desk, Tagawa takes the phone off the receiver nearby and delivers this gem: 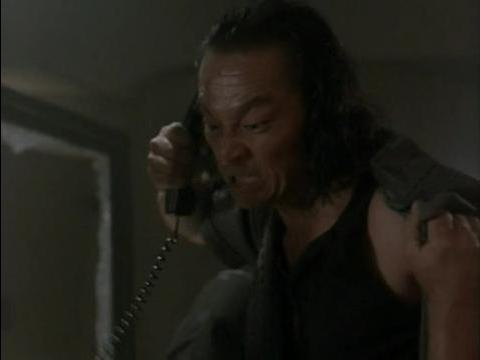 And then he proceeds to beat Gary with the phone still clutched in his fist.  Amazing.

Made during the “good” years of Gary Daniels’s film career, White Tiger is one of the great unseen action movies of the 90s.  Though I think the pacing is a little off at times, the action is pretty much top-notch, being something of a blend between early 90s John Woo and 80s American action.  The choreography in the fight scenes is damn good and the use of slow motion techniques to add emphasis to every bad-ass moment helps sell the film as better than it should be.  And look back over that cast.  We’ve got Cary-Hiroyuki Tagawa, B-action movie villain veteran of such awesome movies as The Perfect Weapon, Showdown In Little Tokyo, and Mortal Kombat.  Rambo’s tragic sidekick, Julia Nickson (“What mean expendable?”), shows up too, and this time without the goofy accent.  Gary Daniels is just the icing on the cake. Richard Martin’s direction has a lot of energy and power, even if it is just because he rips off Hong Kong styles very well.  It seemed like he was destined for a career making awesome action flicks after this one, but a quick glance at his IMDb page shows he went from this to directing Highlander television episodes before his career took a tragic turn and he ended up at the helm of Air Bud: Golden Retriever.  Yeah, what the fuck!?, right?

But the name that stuck out most for me from the credits was Bey Logan, who wrote White Tiger‘s story.  Anyone who’s ever listened to the commentary track on a Hong Kong Legends dvd recognizes his name and knows that he knows his shit about Hong Kong films.  This makes it all the more striking that he would wind up being the writer of a fairly simple story to an American cop revenge thriller.  Still, the movie does retain a very Asian flavor and it’s quite likely Logan is the reason.  One wonders how much control he had over the direction. 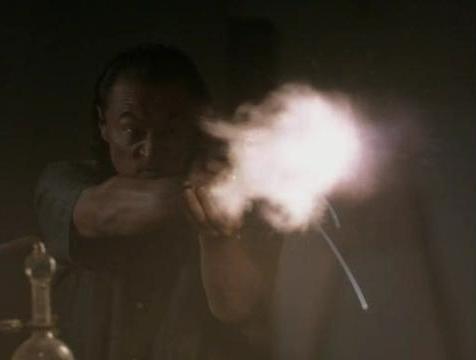 As I was saying though, the action is great.  The shootouts could probably be a tad more intense, but the fights and explosions are all very good.  And when I’m talking about explosions, I don’t mean just from cars blowing up and whatnot, I mean, like, every time a goon shoots a gun, a giant flame ball shoots out of the barrel.  Sometimes with sparks.  Most of these fiery clouds and shootouts are somewhat central to the plot, but there are also fights that come out of nowhere, interrupting dramatic moments or scenes of exposition.  It’s as if the movie doesn’t want you to forget what kind of film it is.  And while this may be distracting to some, I was pleasantly entertained by these shenanigans.

I guess my only real problem was with the lack of fatalities produced by our hero.  I know he’s supposed to be the incorruptible good guy, even going so far as to say he was “a cop not an assassin”, but I really wanted Daniels to let loose like in Rage.  There were plenty of bodies, but not enough from team good guy.  Oh well.

Mostly White Tiger is just a fun ride and good showcase for Gary Daniels as an action star.  It’s full of fighting, ‘splosions and slow motion bad-assery.  These days you can usually find it online for pretty cheap and I’d recommend picking it up as it’s one of Daniels’s best.

If you’re a D.E.A. agent, there will be no consequences if you decide to go rogue, kill off all the members of a drug kingpin’s burgeoning empire, blow up half a city and a ship docked in the countryside.  The rules don’t apply to you. 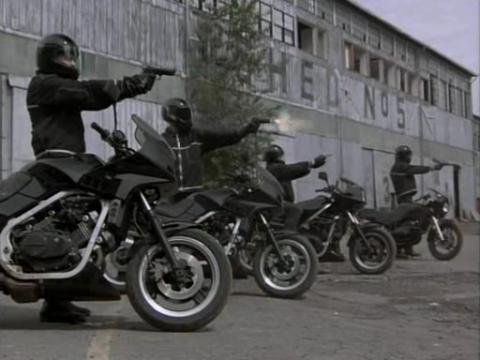