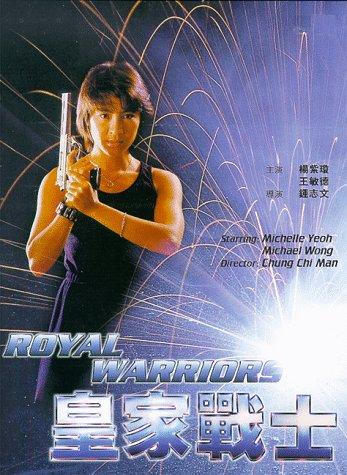 After a trio of off-duty police thwart an airline hijacking, they are targeted by vengeful war veterans. 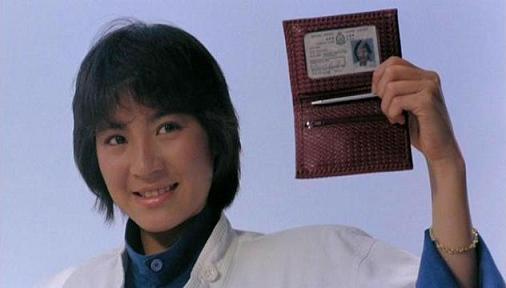 Yip is not unlike Yeoh’s characterization of Inspector Ng from Yes, Madam, though here she has slight character details and deals with moral conflict.  She’s essentially a very tough female cop in good standing with all her colleagues.  In fact, her peers respect her so much as to lie to their superiors to protect her when she decides to go rogue.  The role, in effect, exemplifies everything that made Yeoh work so well at the time.  It’s not that she’s terribly proficient in the martial arts (but she is rather good), but that she’s incredibly tough and more than willing to go the distance against her foes. 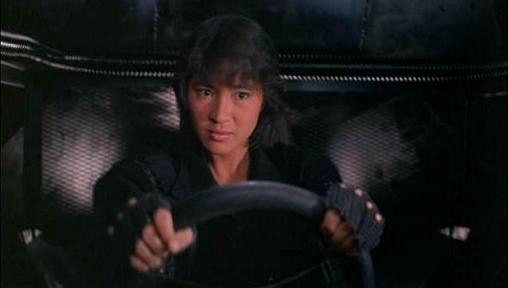 In a surprising turn for the Hong Kong film industry, Yeoh’s female cop is allowed to court a love interest and be the mature person in the relationship.  She’s also seen as being generally able to balance her social life and police duty admirably.  This basically rights all the wrongs committed by Yeoh’s previous film. 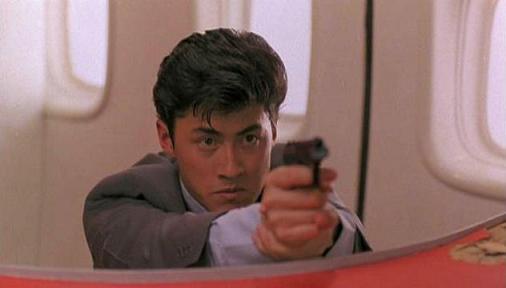 Yeah, what a stretch.  Still, I’ve seen Wong work quite well as a villain (Legacy Of Rage), so his turn here as an immature doofus is surprisingly effective.  Wong is a “sky marshal”, and thus not quite on the same level as the other two main characters.  He has a simple, single-mindedness about him that makes him almost childlike but also intense when he needs to be.  It’s through his blind devotion to Michelle Yip that he finds out about the final surviving bad guy, but through the same means endangers his friends and  drives others away. 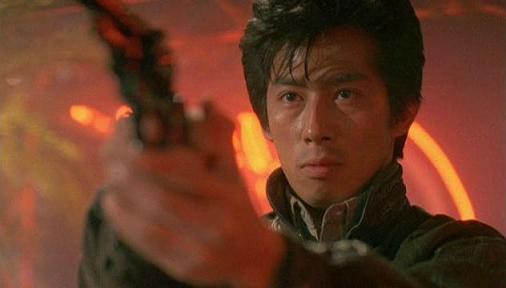 Yamamoto is a highly skilled fighter and Japanese policeman, merely going to China to retrieve his family.  His intent, despite his longing to serve out sweet justice, is to retire from the force and find a desk job so that his wife will no longer worry.  Unfortunately for his wife and kid, Yamamoto’s sense of justice outweighs his sense of familial duty… unless they are what is threatened. These four ex-soldiers were made blood brothers through a harsh war experience.  When one of their own is arrested, the others are quick to stage a rescue attempt.  It is in this rescue attempt that the resulting plot begins.  But damn it if they were ever given names.  All we are shown is their considerable fighting skills and loyalty to one another.  We don’t even know what their ultimate goal was in the first place.  Was there one?

Despite our quad of villains being desperately and insanely loyal to one another, there doesn’t seem to be too much emphasis on anything even remotely gay.  And as for our heroes, Peter is married (albeit somewhat unhappy… but look at that cute little kid!  You know he loves his wife at LEAST for that!), and Michael is hopelessly smitten with Michelle.

As I said earlier, this film is a watermark for progressive women roles in Hong Kong movies.  While there were certainly women ass-kickers before this (Angela Mao made a career doing it), Royal Warriors completely undoes at least the blatant female-empowerment phobia and sexism that marred Yes, Madam.  Now if they could just do the same for The Inspector Wears Skirts…

I counted 25, but there could have been upwards of 30 due to the nature of the car crashes during the chase sequence at the film’s center and a sword attack in the opening.  This might not sound like a lot until you realize that only five of the deaths were people involved in the main plot.  The rest are all innocent bystanders gunned down or blown up by our asshole bad guys. 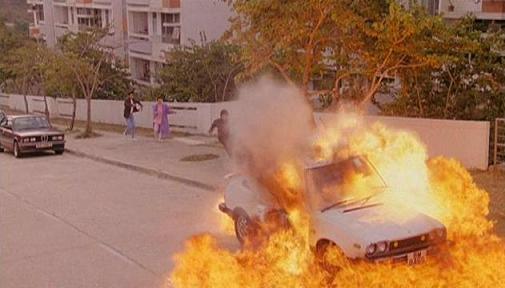 And every pretty much single death in the film is seen in violent, gory detail.  Squibs, fake blood, tears, the works.  It almost takes you out of the film, one minute we’ll be having a good time with chase sequences and martial arts fighting and the next we’re seeing a man cry over his brother’s gunned down corpse.  We get deaths from bullets, burning, explosions, and falling.  Gross.

The villain digs up the body of Michelle’s friend and uses it as bait to lure her into his trap.  But rather than play any more games with this psycho, she takes an armored car from the police station and drives it through the support beams of the baddie’s lair. Effectively destroying most of his well-laid plans and his cover.

Media celebrities because of their very public foiling of the airplane hijacking, the media hounds Michelle even at the funeral of one of her friends.  When asked by the journalists if she had any comment on the case, she glares into the camera and snaps a threat at the remaining villain: 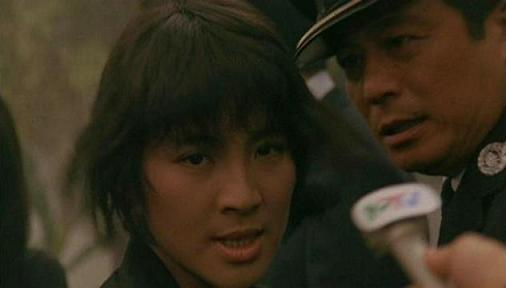 Before going into too much detail about what I thought of the film itself, I think it’s probably best to talk a bit of history concerning the movie’s title.  Though originally titled Royal Warriors, the producers decided to turn a quick buck by later re-releasing the film as In The Line Of Duty, and putting out Yes, Madam (actually filmed and released a year earlier) as a retroactive sequel, calling it In The Line Of Duty 2.  Strangely,  when one of the film’s producers (Dickson Poon) married Yeoh, he talked her into early retirement, necessitating a recast in the lead role for their “new” series of films.  Eventually, they would cast the similarly-named Cynthia Khan (Yeoh was going under the name Michelle Khan at the time), who would go on to star in the next four of the five sequels.  Talk about being chronologically confused. 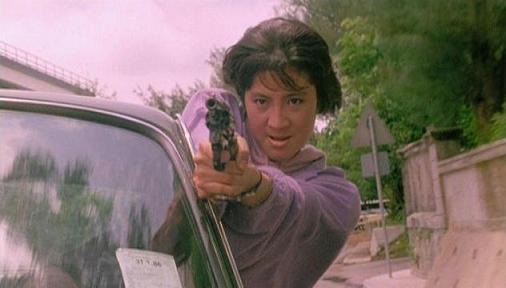 Royal Warriors is one of those films I’m a bit surprised more people haven’t heard about.  It’s got about everything you could ask for: car chases, shootouts, martial arts fights, explosions, bad-ass babes, and a rather high bodycount.  It’s part buddy-cop flick, part chick action movie, but definitely a great follow up for Michelle Yeoh to her excellent turn as a positive ass kicker in Yes, Madam.

And speaking of that film, Meng Hoi, who performed action choreography duties and acted in Yes, Madam, and was a part of Sammo Hung’s stunt team, returns here to once again do the fight scenes.  And he did a damn great job at it, too.  From the opening street fight to the airplane hijack foiling, to the final chainsaw/sharp and blunt objects/random tool battle at the climax, we are treated to perfect examples of what made Hong Kong action so great during this era.  The fights are high energy, quick, creative, and impressively brutal.  I lost track of the times Yeoh was choked, thrown into some breakable object or kicked in the tits. Sure, they gave a female the lead role, but she clearly had to suffer for it. 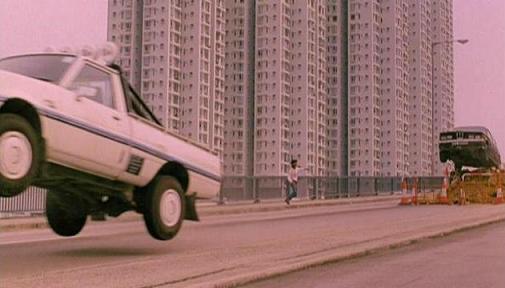 But sometimes, when choosing whether or not to watch an action movie, I have to ask, “Is there a fight involving a chainsaw?”  Well, I’m happy to report that this time there is. 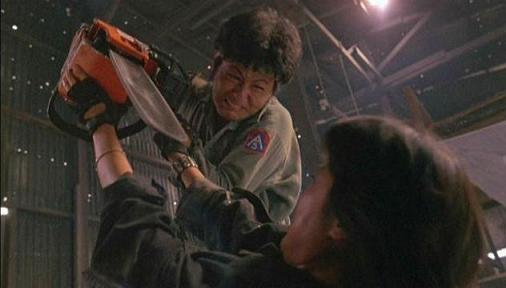 Because you totally needed another reason to see this film, right?

Royal Warriors is just a plain old good time.  I do think it takes itself a bit more seriously than it should, but then, that’s kinda what many of Michelle Yeoh’s Hong Kong films did.  Perhaps it was in their race to balance out the silly idea that women could also be police officers that they forgot to just tone down the melodrama a bit and let the audience just have some fun.  Oh well, this is still a fun ride. An early Yeoh film with several no holds barred action sequences.  For fun, there also a brief role for Kenneth Tsang, appearing in his usual “police captain” role, and a cameo by Dennis Chan.

Director David Chung would follow up this film by working with Michelle Yeoh again in Magnificent Warriors, before reuniting with Chow Yun-Fat for the rather excellent romantic drama An Autumn’s Tale.  Not that I watch romantic dramas… but it’s really good.  Like this one.

Friendship can be a powerful thing, but unless it’s used for good it can only result in the pain and hurt of other.  Oh, and Michelle Yeoh is a total bad-ass babe.