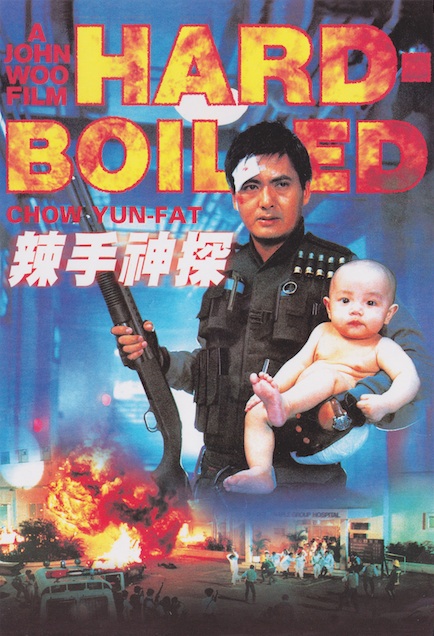 A hard-boiled Hong Kong police inspector and an undercover cop must team up to take down a gun smuggling mob boss. 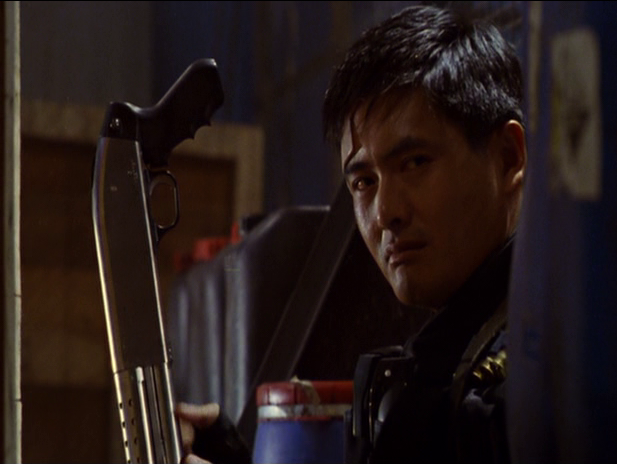 Chow’s final (as of yet) outing in a John Woo picture proves to be another excellent one.  Tequila is a hot-headed, plays-by-his-own rules type, constantly butting heads with his superiors, but an incredibly gifted gunfighter.  He’s Harry Callahan with far more agility, but also considerably more emotional.  His decisions are generally made on the fly and through emotional interest rather than any kind of logical deduction.  He has a distinct lack of fear, but whether that’s a positive remains to be seen. Leung is Hard Boiled’s MVP here.  Stealing the movie away from a star like Yun-Fat and a master thespian like Anthony Wong handedly, Leung is magnetic and mercurial.  He’s astounding to watch as the undercover agent on the edge.  Leung is one of the few actors out there who can display a full color wheel of emotions within seconds and make it work in the scene.  As Alan, Leung plays heavy at the redemptive angle, but skillfully allows the character to teeter dangerously over the precipice of morality. 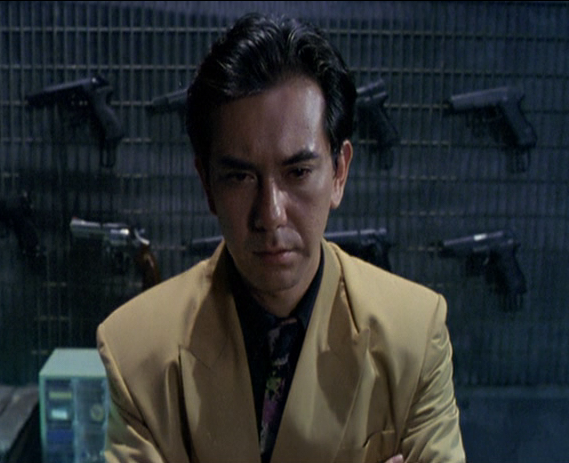 Wong will most assuredly go down in history as one of the more underrated actors in annals of Hong Kong cinema history, but you probably wouldn’t know it from his turn here as Hard Boiled’s big villain, Johnny.  He’s sort of a run-of-the-mill opportunist gangster here.  His sudden rise in the ranks of the Triads and gun smugglers show at one time he was likely a resourceful and perhaps over-ambitious type, but his quick temper, jealousy, and lack of respect for other makes it hard to understand the loyalty of his henchmen. Stuntman and action choreographer Philip Kwok is an excellent find for Woo.  Mad Dog manages to be both tough and, later we find out, a man with a code of ethics.  But as he spins off a motorcycle he’s sent crashing away, and begins firing an automatic handgun at his enemies all in one smooth motion, it’s clear he something special.

It’s a well-known fact John Woo has very little cinematic interest in women.  Hard Boiled does nothing to dispel this notion, as very little time is spent with Teresa Mo’s character in the film. 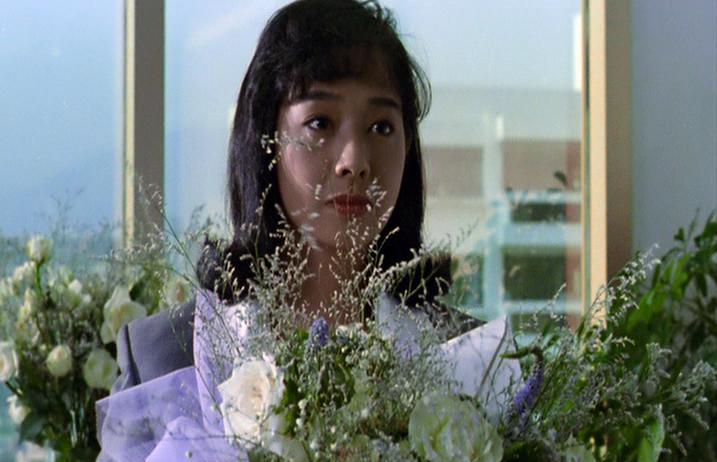 This isn’t to say she’s a poor character, or even that she is mistreated, but she is given the short end of the narrative stick.  She exists to rebuff Tequila’s romantic advances and roll her eyes at his quirky behavior.  That being said, she does get a decent moment or two during the film’s big finale, so there’s that.

By any standard, the gun battles in Hard Boiled are immense.  By extension, so is the bodycount.  With Chow Yun-Fat dishing out the highest numbers, the rest of the cast mostly seem to kill over twenty or so each, putting the final tally somewhere over three hundred.  Most of these are killed by the multitude of bullets flying through the air, but we also get plenty of deaths from explosions and at least one sliced throat.

The opening teahouse battle is impressive enough in its destructive bombast and the final thirty minute gunfight between the police and the gun smugglers in the hospital is amazing, I think the most polished gunfight is the one in the warehouse.  Tequila raids the warehouse alone, against dozens of armed henchmen, but not only doesn’t immediately become Swiss cheese, he manages to cause absolute chaos in their ranks.

This, and some well-thrown smoke bombs, are more than enough to give Chow Yun-Fat’s ultimate gunfighter the edge as he lays waste to his enemies and causes them to retreat. 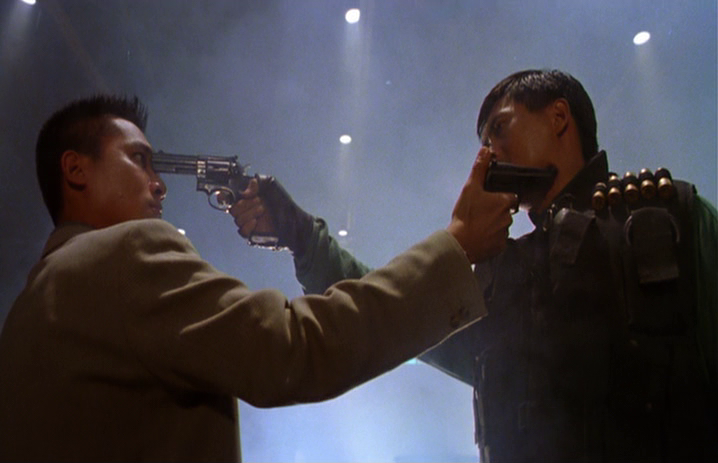 How does one begin to talk about what just might be the greatest Action film of all time?  How high of praise can there be before it becomes just too much?  The truth is, this is just a masterclass in how to be too much of a good thing while still feeling like just enough.  John Woo’s final Hong Kong action film is his greatest triumph, a bittersweet cap to a six year spree of Heroic Bloodshed delight.

What began originally as John Woo’s version of a Dirty Harry film became an insane exercise in control of action choreography and pyrotechnics that rival nearly anything western cinema would produce for decades.  Along with many other Hong Kong directors (like Ringo Lam, Tsui Hark, Kirk Wong, etc.), John Woo was looking to make it in Hollywood both for political and artistic reasons.  Hard Boiled contains just enough emphasis on a time limit to emphasize the fears of the coming new government in 1997.  But Woo, ever the optimist, submits that the old guard, however battered and bloody it might get them, owe it to the next generation to protect them from the dangers of the world. 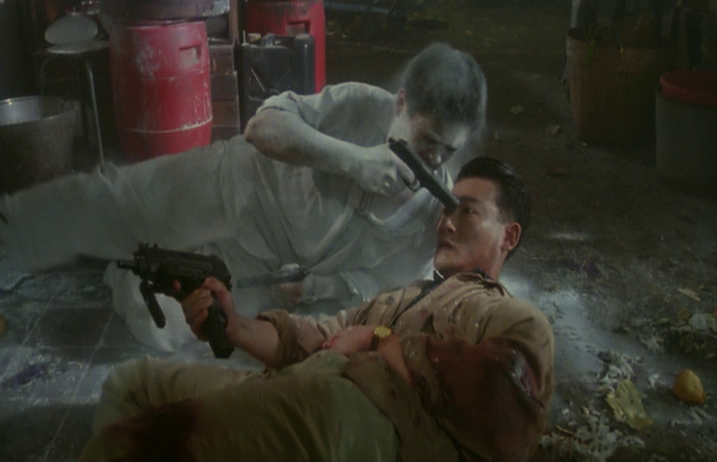 In fact, Hard Boiled is probably the most symbolically overt of all of Woo’s films.  Chow Yun-Fat’s cocky charismatic turn as Tequila meets with his informant while fishing.  Weapons of destruction are hidden in the morgue of a local hospital.  Both of our leads continue Woo’s almost homoerotic fascination with male bonding only after they’ve lost partners (or in Tony Leung’s case, a surrogate father type).

And yet Woo shows himself here to be just as concerned with surface deception as with his usual overt symbolism.  Characters hide traditionally masculine traits underneath a kind of feminine shield.  Tony Leung’s Alan makes paper cranes after every murder, while Tequila plays in a jazz band.  The masculine and spy-like coded messages Alan sends his superior are hidden beneath Lionel Richie pop songs.  Guns, like that famous scene in Terminator 2, are hidden in a box of flowers.  This is John Woo in a microcosm. This makes so many scenes more interesting, but it makes the entire picture kind of fragmented.  The only true throughline of the film is the symbolic domestication of Chow Yun-Fat’s wandering gunman.  His relationships are terse, and though he remains ever flirtatious with Teresa Mo, it’s almost a mother/child interaction at times.  By the end of the film, Chow is seen singing nursery rhymes to an infant. Most of the movie is simply built around its three huge action sequences, and in that regard it’s a tremendous success.  The structural and collateral damage on display in this movie is immense.  The crew reportedly used around 100,000 rounds of ammunition for the gunfights, and it absolutely shows.  The amount of choreography and stuntwork required to pull off what John Woo does here is nigh on miraculous.

Then there is the script itself, which might come across typical, if even cliche.  But Woo and screenwriter Barry Wong understand how to make genre staples like the bickering police chief or the rogue cop less redundant and more like towering archetypes.  Chow Yun-Fat’s Tequila, though originally intended as a kind of ferocious Dirty Harry-type, is here a truly righteous and innocent soul, though in a quick switch can display a countenance of perfect steely determination and wizened perseverance.   He is beautifully counter-balanced by Tony Leung’s Alan, a man truly on the edge of morality, clinging to what’s left of his soul after going too far into his work as a deep cover operative in the underworld.  Woo allows these two to play off one another in what might be his greatest accomplishment for the Heroic Bloodshed genre, even working in a couple death and rebirth metaphors back to back.  First, as Alan literally sacrifices himself in order to aid their mission, forcing Tequila to resuscitate him, and then again as the two newfound friends come bursting forth from the morgue in a hail of gunfire. 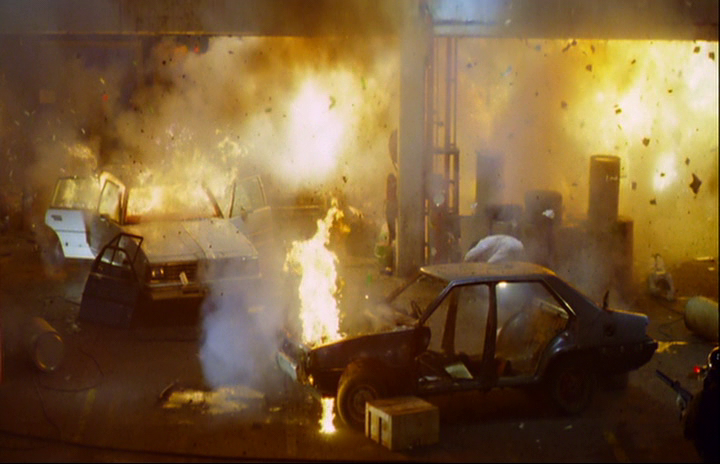 Ultimately, however, the script seems of less importance to the director than do the Action beats.  Fortunately, when these beats do arrive, they have the appropriate thematic weight.  In The Killer, Woo pushed melodramatic levels to such heights he seemed to lose track of much else.  Hard Boiled‘s action scenes are nearly weightless in comparison, but much closer tonally to the material surrounding them.  Moral codes are explored in the midst of these huge action set-pieces, such as when Leung and Philip Kwok’s heavy hitter Mad Dog halt in the middle of a gunfight to allow doctors and patients in a hospital to escape harm.

John Woo may have eventually become subsumed by the style and impossible genre tropes he created, but in a world overwrought with techmically enhanced superheroics and CGI special effects, Hard Boiled will always hold up as an incredible piece of Action cinema.  Made in a time when there really wasn’t much of  discussion of “practical effects” because it was simply how things were done, this is the result of dozens of people’s blood, sweat, and tears.  They did it well and they did it the hard way.  It’s high-octane.  It’s Hong Kong proficiency.  It’s balletic gunplay at it’s peak presentation.  It’s a violent orgy of squibwork and stunts.  It might just be the greatest Action film ever made. 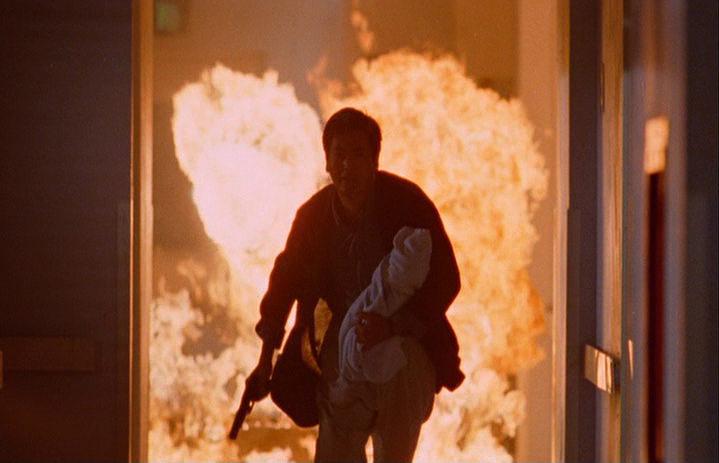