So maybe everyone’s familiar with Top Gun as a parable about homosexuality. If not, watch this video, and then continue:

The action films of the 1980s were damned near built upon undertones of homosexual longing between men. Perhaps this was the right-wing reaction to the last two decades of feminist progression. Whatever the reason, it is apparent that there was a need for that good old male bonding and the showcasing of the male body as strong, sexy and capable of saving the world. These films attepmted so hard to be straight, testosterone-filled epics that they went all the way around the board and landed back on gay.

Now don’t get me wrong, these are all watchable and even great action flicks. It’s just that they carry with them a level of gay undertones almost unheard of in film today.

were forced to shave, wax, and mow their manly forests in order to appeal more to their unsuspecting audiences.

Now I would have included Top Gun in my list, but I just don’t think that it qualifies as an action film, no matter how gay it is. There is one scene of action in a film that is mostly preoccupied with the sexuality of its protagonists and the training of said protagonists against a scowling Michael Ironside. A couple of exploding MIGs in two hours does not an action movie make. So Top Gun notwithstanding, here are my picks for the top five gayest of the action films, preceded by my three runner-ups:

Honorable mentions:
No Retreat, No Surrender This is an early film featuring Jean-Claude Van Damme, though as the flick’s villain. The story concerns a young fan of Bruce Lee played by Kurt McKinney who moves to Washington with his family and attempts to fit in and learn karate. If this sounds similar to The Karate Kid, it should. Director Corey Yuen (The Transporter, Hero) decided to make it after he saw The Karate Kid and thought that the fight scenes could have been done better. For the record, the fight scenes are indeed better, but the plot is obfuscated completely by the overall gayness of one character: R.J.

R.J. begins an entire (albeit thinly metaphorical) subplot in the film where it seems that McKinney’s character of Jason deems himself a homosexual. Jason seems to “choose” this route after being humiliated in front of a girl he desires by a few bullies. R.J., who is gay, takes it upon himself to show his new friend that Jason is truly heterosexual by tempting him, testing him, and finally tricking Jason to dance into the arms of a female. Because of the subplot nature of the gayness and Jason’s overall ignorance of R.J.’s advances, I do not think that this film can qualify for my top five, and thus it is left out.

If the first three seconds of this clip don’t tell you all you need to know about R.J. then I’m afraid you are beyond help: Like No Retreat, No Surrender, this film did not make the final top five simply because there just wasn’t enough actual homosexuality in the plot. Also like NRNS, this is an early film featuring JCVD. But any film where one man sits on a bed drinking beer while checking out his male friend’s physique and commenting on his probable future need for children has gotta be some kinda gay, right? The only Americans in the Kumite tournament, Frank and Jackson get real close, real fast. Oh, and they tell one another that they love each other at the end. Yes, I agree, the poster is almost gay enough. I’m not sure if that is supposed to be Patrick Swayze’s tough-guy look or what, but it looks like Swayze is beckoning you. If you know nothing about this film, then viewing it for the first time can be a real treat. It’s about a bouncer who is apparently better than average at beating up on drunken stripclub patrons because he gets hired by a stripclub that pays well to be a uh, “manager”/bouncer and this somehow causes a lot of problems in the town.

While not getting into tussles with the local manfolk, Swayze enjoys getting oiled up and doing nude Tai Chi. And then there’s the odd relationship between Swayze and the antagonistic, also-oiled-up Marshall Teague:

Yeah. Of course, the film suddenly turns into an action flick after that line, but it was going balls-deep gay before that. Anyway, onto the real list.

With as much overblown machismo as there is going on in this film (a woman even complains about the men eating “too much red meat”…actually, that sounds pretty gay), you might not think of this film as gay. But look again. Yeah, Arnold is all muscley, but what the hell is up with Bennett? 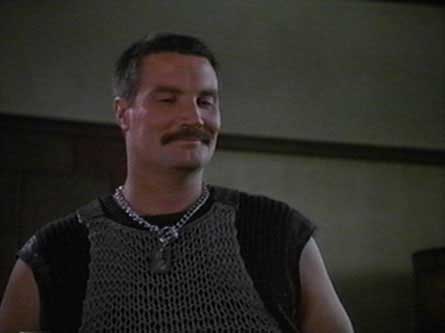 What’s with the mustache? The necklace? Why is your chainmail a couple sizes too small? Wait… chainmail?

Whatever his past relationship to Matrix was, it is clear that Bennett has some unresolved sexual issues with his former C.O. Despite the plot seemingly being about a highly trained military operative trying to rescue his kidnapped daughter, the real focus seems to about a mercenary trying to meet up with Arnold Schwarzenegger for a lot of one-on-one, sweaty man-action. And look how excited Bennett gets when Matrix allows the thought of Bennett penetrating him to enter into his deranged mind. Must’ve been a Village People reject. What? I’m cheating by naming a film series rather than a single film? Fuck you. This is MY list.

The two male protagonists (played by Mel Gibson and Danny Glover) share a pretty close relationship with one another over the series. Hell, Riggs is over at Murtaugh’s house serving him coffee when he wakes up one morning and the two cuddle at the end of the sequel. Here are some of the highlights:

If the last entry doesn’t already have you convinced buddy-cop films are inherently gay (see also: Tango & Cash), then surely this one will. The central premise is simple: two ethnically diverse cops team up to take on the Yakuza while simultaneously learning to like each other. They’d probably get a lot more done if they stopped checking each others’ “form” out all the time. What tops that last entry? Chuck Norris, of course. In a film that tries so hard to be manly it was just inevitable that Lone Wolf McQuade would end up topping the list. This has got to be the single most unintentionally gay film ever made. Opened button-up shirts, cardigans, man-sweat galore, and it’s a buddy-cop film to boot! At the end of Top Gun, Maverick gets the best of both worlds: the girl and the guys. At the end of Lone Wolf McQuade, McQuade chooses his male partner.

Now, I’ll be showing some clips, but you really have to see this film to understand just how gay it is. It’s cartoonishly ridiculous in the first place, part Western, part buddy-cop film, and part versus movie. Norris is drinking beer or getting dirty every other scene, drives a truck, has hundreds of guns lying about his house, and flips out when a woman comes in and starts cleaning things (and replacing his HUGE stash of beer with actual food in the fridge). But really… just watch it.

Without any further ado, I present to you… Lone Wolf McQuade:

I hope you’ve enjoyed the list. Now I’m off to do more killcounts.