In a sort of counterpoint to my colleague’s argument that 2015 was a terrible year (he seemed almost speechless about it), I’m of the mind it was one of the best of the modern age of cinema.  I’ll admit, for Action films it was a a bit light.  But in a year which saw the likes of Creed, The Martian, Ex Machina, and The Hateful Eight, I can honestly say things were pretty damn good.  As for the Action genre, yeah.  But there were still some good ones in there.  So without further ado, here’s my list of the top five movies of the genre.

Liam Neeson continues his reign as king of the Ass-kickers Over 50 Club, this time in a low-stakes action thriller disguised as a crime drama.  Replete with excellent performances from all the major cast (including William Hurt as another weathered old warhorse), it’s still Neeson’s show all the way through.  Like Liam’s first Taken film, Run All Night allows the big Irishman a chance to do both great acting work and also kill as many people onscreen as possible.  If you found A Walk Among The Tombstones to be yawn-worthy, you’ll be pleasantly surprised by how tense this one can get. 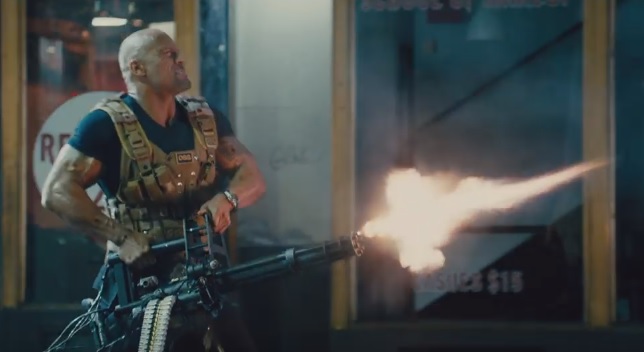 2015 brought us things I never even thought to hope for: Dwayne Johnson vs. Jason Statham, Ronda Rousey versus Michelle Rodriguez, and Jason Statham versus Vin Diesel.  And we got all of these within the same movie.  Sure, it was a bloated, cobbled-together mess of a movie stitched together after the sad and unfortunate death of Paul Walker, but it was still fun.  It’s clear this was supposed to be a revenge/chase film, but all that changed to pay tribute to the late PWIII.  But you can’t argue too much against fun.

There may come a day when movies no longer contain competent leading men, great stuntwork, and exciting premises.  But it is not this day.  Tom Cruise still rules.

I have never been one to claim Star Wars as a huge favorite.  And while I thought the new film was something of a retread of A New Hope, I would have to be pretty damn cynical to not have fun during the exhilarating dogfights, laser sword battles, actor chemistry, and Harrison Ford coming back to life for the first time in years.  While I don’t see any cinematic reason for this to be one of the top grossing films of all time, it was still a good reason to plant my ass in a seat for a couple hours and enjoy some goofy science fiction fantasy.

Was it going to be anything else?  Mad Max has always been a great series (hey, don’t you dare bash Thunderdome.  It’s as memorable as it is quotable), but this absolutely solidifies it as classic.  Tom Hardy might not be Mel Gibson, but he’s still got the goods.  Surprisingly, it’s Charlize Theron who ends up stealing away the movie and carrying it across the finish line.  But let’s give credit where credit is due: to 70 year old director George Miller, showing up even the Fast & Furious films in terms of sheer vehicular lunacy and giving a first class lesson in practical stuntwork for the ages.