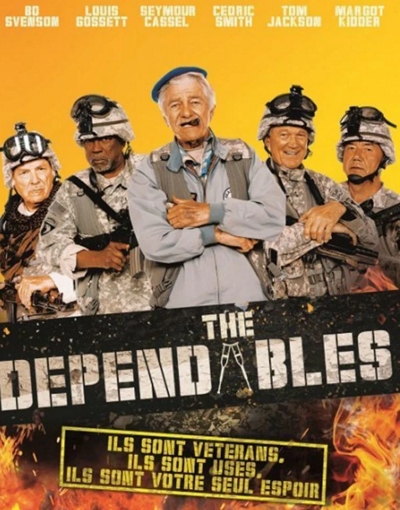 The Dependables/Pride of Lions (2014) Body Count Breakdown by orphen20

Defense at the US Army Post 238: 14
Robinson sets up a trap and presses the button to detonate it, killing 3 Taliban.
Skinner shoots 2 Taliban with a machine gun, and Ackers shoots 1 with a revolver.
Jones throws a grenade at 2 Taliban rebels.
Skinner and Dempsey shoot 1 Taliban each.
Dempsey shoots another Taliban rebel.
Jones throws another grenade at a Taliban soldier.
Skinner and Jones kill 1 Taliban each.

“Aim and fire”: 35
Stansy shoots 2 Taliban rebels before he blows up a 4WD truck. Skinner shoots 1 at the same time.

“Get them out of here”: 5
Stansy shoots a Taliban rebel with an AK-47.
Robinson shoots 4 Taliban rebels by blowing up 2 4WD trucks.

Turning back after the bridge has collapsed by explosives: 1
Robinson shoots 1 Taliban rebel.

“Nobody move”: 1
Hitchcock shoots one of Razaaq’s men.

“But he’s still a snake”: 1
Razaaq shoots his own lawyer LaRoche with a revolver.

“Watch your back, Matt”: 1
Stansy shoots a Taliban fighter.

“Nice knowing you, folks”: 3
Skinner steps on the detonator that was set earlier by Robinson, Jones, and Stansy to blow up the cargo truck, killing Razaaq, the driver, and Hitchcock (shared).