I don’t usually go in for the memorial articles, but today’s death of the great and mighty Sir Christopher Lee hit me surprisingly hard.  He had been a mainstay for GENERATIONS of filmgoers, and a standout in everything from a James Bond movie to Star Wars to The Lord Of The Rings.  And while many will always remember him as Dracula, I first saw Mr. Lee in a small fantasy film called Mio In The Land Of Faraway. 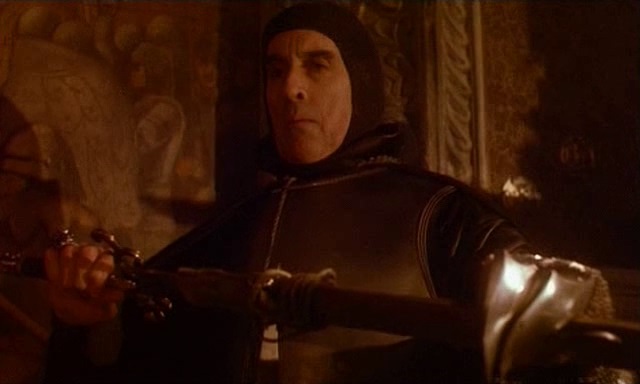 The movie’s not much to talk about, being a trite and sometimes terrible little flick about a boy escaping to a fantasy land, but aside from the fact it can boast being Christian Bale’s first feature film it also has a rather enjoyable performance from Christopher Lee as the primary antagonist.  Lee takes what is basically nothing on the page (a sword and sorcery-style Darth Vader type at best) and wrings out all the evil he can muster, while bringing in a sense of tragedy.  In a movie with Timothy Bottoms as the great king of a far away land, invisibility cloaks, and bread that can satisfy all hunger, only Christopher Lee really seems to give a damn.  He sold me on the whole stupid movie when I was a kid.  I love him for this.

Lee also serves a very prominent role in my favorite horror film of all time, The Wicker Man.  I know it’s a bit cliché to use such terms, but Lee was all these things: iconic, commanding, spellbinding, entrancing, charismatic, and powerful.  His is a presence that will be greatly missed, but fortunately his work will live on forever.  I leave you with the following, a rendition of Paul Anka ‘s My Way, performed by Christopher Lee himself in a metal band he joined when he was only 84 years old: