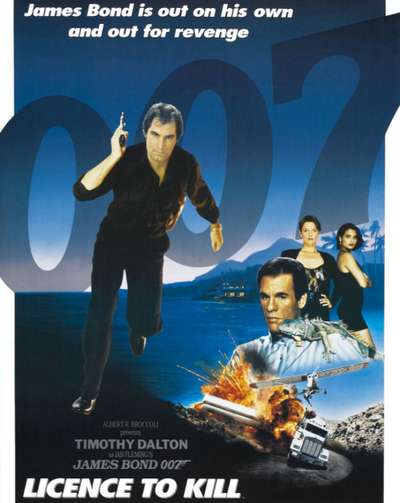 G“Give her his heart”: 2
Perez strangles Alvarez’s bodyguard with a garrotte wire
Dario cuts out Alvarez’s heart with a knife offscreen (Scream heard)

Escape: 1
Killifer hits the DEA driver in the head with a shotgun and drives the truck into the water leaving him to drown

“Compliments of Sharkey”: 4
Sharkey’s body is seen killed by Clive
Bond shoots Clive with a speargun
Bond pulls off one of Krest’s men’s mask and hits him in the face with a spear gun leaving him to drown
Bond pulls the plane door free causing the co-pilot to fall with it into the sea to his death

Failed Assassination: 5
The tank gunner shoots the shack causing a heavy beam to fall and crush the male ninja
The tank gunner blows up Fallon
Loti shoots a soldier
Heller shoots Loti
Kwang bites into a cyanide capsule poisoning himself

“Launder it”: 1
Sanchez ramps up the pressure in the decompression chamber then cuts the line with an axe causing Milton Krest’s head to inflate then explode

“Switch the bloody machine off!”: 1
Bond pulls Dario into the cocaine grinder shredding him to pieces

Dead End: 1
Heller’s body is seen impaled on a forklift by Braun

“You could have had everything”/“Don’t you want to know why?”: 7
Perez shoots a tanker with a stinger missile unintentionally blowing up one of Sanchez’s men
Bond unlatches his tanker and sets it to collide with another blowing up 2 of Sanchez’s men
Sanchez shoots Truman-Lodge
Bond opens the fuel valve on a tanker and pours the gasoline onto the road causing Braun’s truck to catch fire and Braun to drive off a cliff killing himself and Perez
Bond sets a gasoline soaked Sanchez on fire with Felix’s lighter and is blown up by the explosion of a tanker