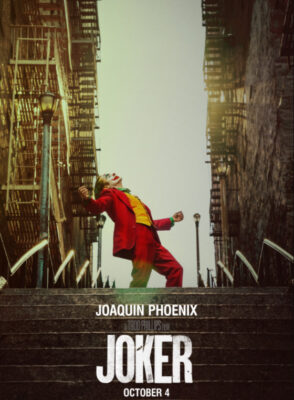 “I use to think my life was a tragedy… but now I realise, it’s a fucking comedy”: 1
Arthur smothers Penny Fleck with a pillow

“You’re the only one who was nice to me”: 1
Arthur stabs Randall in the eye and neck then smashes his head against a wall

Wrong Clown: 1
Burke shoots a clown mistaking him for Arthur

“I’ll tell you what you get! You get what you fucking deserve!”: 1
Arthur shoots Murray Franklin in the head

Riot: 4
Rioters crash an ambulance into a police car, killing the two cops inside
A rioter (Joe Chill) shoots Thomas and Martha Wayne

“I was just thinking of a joke”: 1
Arthur kills the Asylum Psychiatrist offscreen (indicated by bloody footprints)

It’s unknown what Arthur did to Sophie; Todd Phillips confirmed she’s still alive but that’s not saying much
Burke and Garrity are beaten down by a mob