In the fallout of the Expendables films, studios have been scrambling to make their own ensemble action films in an attempt to cash in on their success. Here we take a look at the ones currently filming. 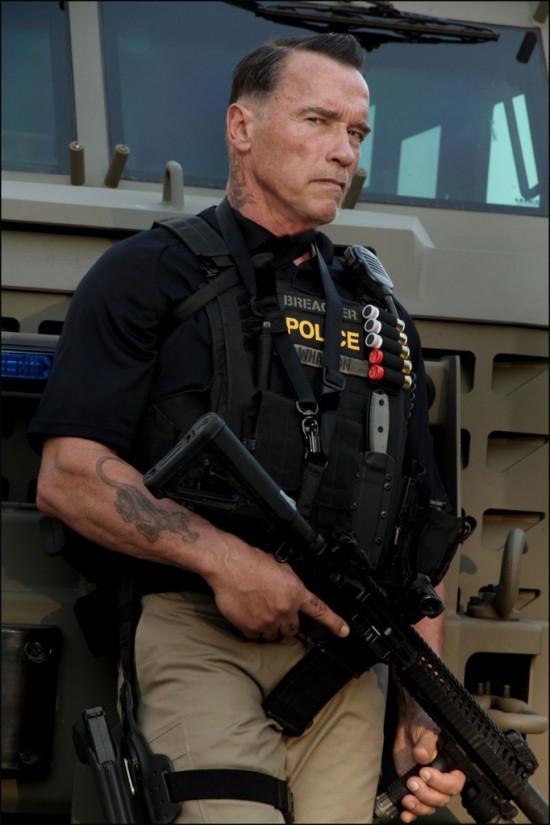 David Ayer’s Ten, which had temporarily been retitled Breacher, has rounded up one hell of a cast. As we’ve reported the film as about a squad of DEA agents (Ten of them it’s assumed) being hunted down by a lone assassin.

Not all of the actors roles are clear, we do know that Arnold will be playing the leader of the squad, according to David Ayer, his character will be heavily tattooed, with a grey buzz cut and be far more villainous than other characters he’d played. Holloway will be the roughneck Medic on Arnold’s team, Olivia Williams will be a cop investigating the deaths and Terrence Howard will also be one of the team members, who wants to back stab Arnold and run away with his share of the loot (literally the most likely movie character to die in the history of cinema).

Filming commenced October 20th, which will last three months. Unlike The Expendables 2, there is no ratings controversy, this will be rated R from the get go.

Although Frank Grillo is a tough dude, they’ll need to stack up the villain side a bit more as they’re still severely under matched against the guy who punched Uri Boyka through a helicopter.

The plot concerns former DEA agent Phil Broker (The Stath) who moves his family to a quiet town, where he soon tangles with a local meth druglord Gator (Franco). Ryder and Grillo will play bikers who work for Gator, while Bosthworth will play Gator’s methhead sister.

A set photo of Grillo, can also rule out a PG-13 rating here too.

There’s no definitive plot synopsis yet, however some of the new cast members will join the team as opposed to being all nemesis. Anthony Hopkins will play a mad scientist and David Thewlis will play an arms dealer named The Frog. The film has a release date of 3rd August 2013. Taking the Expendables slot.

At the exponential rise in quality of each Fast/Furious film, this one may be an awards contender. There’s no plot beyond two heist crews competing for the same target (According to Diesel, they can’t fit all the plot into one film *Rolls eyes, makes jerking off motion*). Vin and co. return to take on a heist crew led by Luke Evans and The Raid’s Joe Talsim, Michelle Rodriguez’ Letty is revealed to be alive and for good measure Dwayne ‘The Rock’ Johnson, aka the best part of the entire franchise is back, this time with soon to be action legend (And legendary pisshead) Gina Carano as his partner.

I’ll let the plot synopsis speak for itself;

“ “The second film in the Machete trilogy finds Machete mourning the loss of [SPOILER], slain during a run in with the cartels. Machete is recruited by the President of the United States for a mission which would be impossible for any mortal man. Machete must battle his way through Mexico to take down a cartel leader, Mendez the Madman, who threatens to fire a missile on the US. Machete foils Mendez’s plot only to find that the missiles are remote wired to and triggered by the madman’s still beating heart. The only man who can disarm the missile is eccentric billionaire arms dealer, Luther Voz, who has hatched a plan of his own to spread war across the planet with a weapon in space. Machete takes on Voz and his army in order to dismantle his master plan for global anarchy”

There’s nothing I can possibly add to this. Open Road Films will distribute instead of 20th Century Fox who released the first Machete. Click the link to see the insanely large cast.

Not at all a film to watch out for, you may want to check it out if you’re a fan of Daniel Bernhardt. He’ll be appearing as something called “District 9 Tribute Boy”.

Finally, some news tidbits, for your pleasure;

James Cameron may finally be returning to our genre! His production company Lightstorm has picked up the right to Taylor Stevenson’s novel, The Informationist. The film concerns a woman with a particular set of skills being recruited to rescue a Texan Oil magnate’s daughter in the jungles of Africa. The Girl with the Dragon Tattoo meets Taken meets Tears of the Sun. I can dig it.

The new Die Hard movie has a release date! No, not A Good Day to Die Hard, but Olympus Has Fallen! Film District will release the film April 5th, 2013.

Lastly, test screenings for Sly and Arnold team up The Tomb are yielding very positive reviews. The film is definitely going to be rated R and Stallone and Arnold will finally fight on screen!