An insane martial arts mercenary beats, smashes, dismantles, and kills the Yakuza forces trying to kidnap the daughter of a deceased oil tycoon. 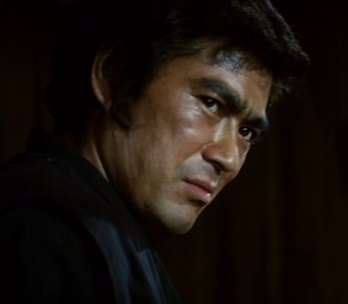 A violent, narcissistic, mercenary, and possible would-be rapist, this is about as bleak and dark an anti-hero as you’re likely to find in all of cinema.  The movie does all it can to make you not like him, and yet there is something to be said for Chiba being cast in the role.  You admire his power and hate who he hates.  Chiba is an evil Bruce Lee, all of the skill and none of the philosophical kindness.  Seriously, Tsurugi intervenes in a high-profile kidnapping not out of the goodness in his heart, but out of spite for the Yakuza.

He is Japanese rage incarnate, carrying the post-World War II fury of an entire nation in his veins.

Despite a protagonist who has no qualms with selling a woman into the sex trade, I wouldn’t casually claim this as “problematic” as it would seem at first glance.

Sarai, the daughter of the deceased oil tycoon, and target of Yakuza thugs and crooked contract negotiators is not prepared for the underworld shenanigans she finds herself embroiled in over the course of the movie.  But she’s no fool, and eventually shows herself to be resourceful and intelligent in her situation.  There’s also a woman Yakuza, and the poor lady who finds herself sold into prostitution comes back to bite Tsurugi in the ass later in the film.  The universe of the movie is about as equal opportunity cruel as one can imagine.

To say The Street Fighter is a violent movie is to undersell it considerably.  This is one of the most relentlessly violent films of its era, if not the entire genre.  Chiba even puts Steven Seagal to shame with the destruction he unleashes on the human body.  He kills 26 people, with each death just about more horrific than the last.

People are stabbed, shot, crushed, beaten, torn, have their eyes gouged out, throat torn from their neck, and genitalia ripped out from their underwear.  As absolutely as gruesome as all that sounds, there’s more.  This movie earned its X rating in the United States.

This is likely the most difficult category for this film, as there are multiple great battles in the movie.  But I think the one which most admirably demonstrates the insanity of the film, while also showing how well it dances the line between grindhouse camp and traditional martial arts badassery is between Takuma Tsurugi and the Zatoichi-like blind swordsman.

The entire film is like Sonny Chiba trying to out-badass every other movie, and this is where it becomes most blatant.  The swordsman even hides his weapon inside of a cane.

Takuma Tsurugi has got to be the meanest, biggest piece of shit ever to be considered a hero in a movie ever.  Snake Plissken may have doomed civilization to war and chaos on at least two major occasions, but the guy had a moral code.  Tsurugi has his pride in his fighting skills and not much else.  After breaking a guy out of prison, Tsurugi refuses an allowance of more time for his employers to pay for the job and causes one’s death while selling the other into prostitution.  It is absolutely horrible.

Due to the magnetic charisma of Sonny Chiba, the acrobatic fight scenes, and creative violence, The Street Fighter is a wildly entertaining little action ride through the scummiest parts of 1970s Japan.

Prolific director Shigehiro Ozawa, who had made a name for himself doing Yakuza films throughout the 1960s, sometimes with star Tomisaburo Wakayama, brings his usual propensity for violence again here. Ozawa is not just interested in violence, he has a knack for examining it from every angle, making sure you see and feel every single impact and every broken bone and gouged out eyeball.  He has characters being punched so hard their last meal comes back up.  Hell, people are bleeding from internal injuries out of whatever hole Ozawa feels works for the shot.

But it’s not enough.  The Street Fighter features a visual gag so outrageous it’s kind of admirable.  When some character’s are struck by the incredible blows dealt by Chiba, the movie goes into an x-ray vision so we can see the internal consequences of the impact.  It’s amazing.

Ozawa had worked with Chiba on the modernized retelling of the 47 Ronin story Gyangu Chûshingura, and as such had an idea of how to use Sonny’s physicality.  And Chiba is nothing if not a presence of horror in this film.  Whether he’s literally knocking people’s teeth out or simply stalking his prey, he is like a wild monster of doom.  And while the twitching, constipated expressions are WAAAAAAY over the top at times, this style would prove extremely profitable to Sonny Chiba and would translate well overseas.

In the United States, the film was first given the dreaded X rating for its violence, before finally being trimmed down and dubbed for American audiences who loved the chaotic eccentricities of its star.  Chiba would go on to make several sequels and various action films using The Street Fighter as a template.

Though Shigehiro Ozawa had made many films before The Street Fighter, it would be this film and its litany of acerbic sequels that would define the rest of his career.  His final film would be named Sister Street Fighter, Fifth Level Fist, despite having no connection to the original films.  We can’t all be winners.

Sonny Chiba will hurt everyone you know, everything you know, and never feel an ounce of pity for any of it.