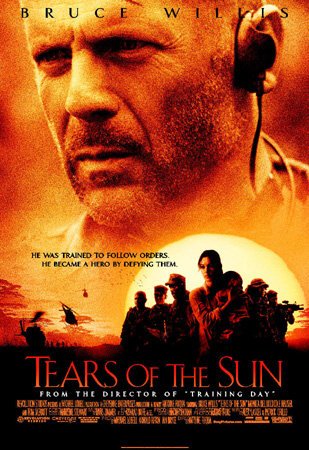 A United States Navy SEAL team sent on a rescue mission is caught up in a civil war, as they attempt to bring several dozen locals to safety. 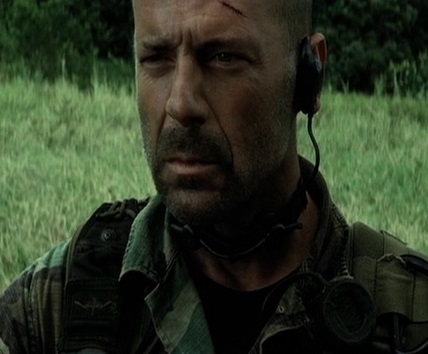 That’s seriously his name.  A.K., like the gun.  Anyhow, Bruce does the blue collar thing, but this is mostly something of a ruse, as the character gets a lot less mercenary pretty early on.  Honestly, it’s one of the guy’s better roles.  Willis keeps the film grounded, giving a truly solid performance, and letting the make-up and scenery do most of the work for him.  He let’s Bellucci slap him pretty hard across the face with nary a reaction, but it works for the character, who isn’t supposed to be nearly as hard-assed as his name would suggest. 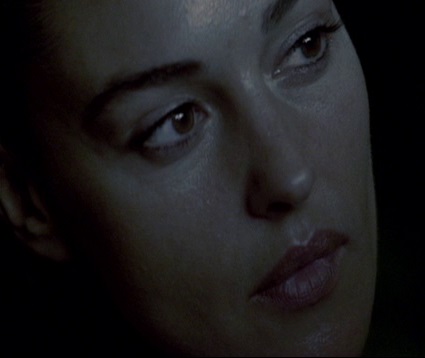 She’s a doctor, so she cares.  She’s a woman, so she cries.  Bellucci does what she can with the material, but most of her contributions merely add up to, “These people need rest!”  I’d complain, but the script doesn’t really go anywhere else to give her much more to work with.

A bunch of bad-asses.  It’s hard to praise theses actors enough for the little touches they bring to the movie.  Nick Chinlund and Cole Hauser are suitably rugged, but I think the standout of the team has got to be Eamonn Walker, who gives the movie a lot of gravitas and the team its soul.

The Nigerian rebels.  While mostly a faceless force of combatants, a la Assault On Precinct 13, we do get some especially good work from martial artist Peter Mensah as the de facto leader of the pursuing rebels.  Mensah (who was certifiably awesome in Jason X) uses his greyhound-like features prominently here to good effect, becoming almost like a slasher villain.

Not a lot of depth is given to the rebels, unfortunately.  Or maybe it’s fortunate.  The political reasons for their uprising and subsequent sadistic hunting down and killing of their foes is summed up as “cultural differences” and not much else is said.  We know they are apparently Islamic, but mostly that they are anti-Christian.

I’m not sure the movie is intentionally sexist, but the film does not paint women as especially capable.  Monica Bellucci comes across nurturing but stern about her patients.  She is especially emotional towards the suffering of others, though I wouldn’t call that a weakness… or a strength.  But here’s the thing.  When the women of Tears Of The Sun aren’t fleeing from danger or cowering in fear, they are literally getting their tits cut off.  That alone leaves me a bit sour on some of this film.

There are so many deaths in this movie.  Like soooooo many.  In a trick Rambo would use to about the same effect a few years later, Tears Of The Sun opens with footage of what appears to be actual acts of bloody violence to set the tone.  That being said, there are shots of bodies upon bodies, making it hard to gauge just how many people die in this one.  Bruce Willis claims 15 of these kills, but is hardly the most lethal force of the film.

The final push toward the Cameroon border is undoubtedly the most dynamic of the gunfights of the film, featuring the SEALs working together as a team.  Whether its their initial push forward, walking Commando-style directly at the attacking horde, or their phalanx-like tactics as they guard the rear of the fleeing patients, the final battle is a well-choreographed piece of cinematic flair.

As the movie was produced by Willis’s own Cheyenne Production company, it’s just as expected we get some hardline right-wing philosophy jammed into the plot.  After rubbing the doctor’s nose in the fact her colleagues back at a missionary were all slaughtered (as well as all of the patients being treated there), Willis makes her look him in the eye and says, “Take responsibility for the choice you made.”

Credit must be given to the film makers in 2003 for making such a humorless, stone-faced film.  The environments are dark, the actors as serious as it gets, and the tone is bleak.  That being said, Tears Of The Sun is, for the most part, a grand epic war film, the likes of which I haven’t seen for years.

Released just in time to coincide with the United States’ invasion of Iraq in 2003, this is a modern equivalent to a John Wayne film.  Think The Green Berets, which saw Wayne basically arguing for the United States’ intervention in Vietnam.  This is fellow right-winger Bruce Willis putting forth the nation that not only is America the right country to police the world, but we are willing to bend the rules to do it right.

Bruce Willis plays Lt. A.K. Waters (seriously), a blue collar Navy SEAL leader who just wants to get the job done.  He’s not in it for the politics or the philosophy, but when he sees lethal devastation in front of him (and a little screaming guilt from our heroine), he barely pauses before plunging himself and his men fully into a high risk situation to save the day.  America will do the right thing when confronted with evil.  They will die fighting for freedom, regardless of whose it is.

It seems a bit like subtext at first, maybe a little too well hidden.  But that is smashed away when two characters have a full-on conversation wherein it’s damn near said that slavery saved many Africans from the horrors of the civil strife on that continent.

Musa: Where are your ancestors from?

Musa: In Africa. Where in Africa?

Silk: How the hell should I know?

Musa: You are from here. This part of Africa. Your nose… eyes. Like mine.  You know, if it wasn’t for slavery, you might still be living here.

It’s an absolutely jaw-dropping moment in the film, presented almost as an aside.  Later in the movie, Eamonn Walker’s Zee tells Willis, “Those Africans are my people, too.”  Bruce looks this black man cold in the eyes and fist pounds him.  “For our sins,” he says in that gruff little Bruno whisper.  Slavery forgiven.

So again, if the film weren’t playing every moment so poker-faced, it would be absolutely ridiculous.  Hell, it still is ridiculous.  But somehow it works.  Kudos to Training Day director Antoine Fuqua for pulling it off.  Fuqua, who got his start in Hollywood attempting to ape other action directors like John Woo with The Replacement Killers, pulls off a minor miracle here by making such a dour, rain-soaked nightmare an immensely watchable movie.  And while the ending of Tears Of The Sun quickly devolves into Michael Bay-like military porn, and the political subtext of the film may leave something to be desired, it’s still a great piece of nearly-forgotten cinema, unfairly maligned at the time of its release.

As an action film, the movie works well, ratching up the tension before a gunfight and then letting things get intense during.  I’m not sure how accurate the tactics used by Willis and his fellow SEALs are, but it seems pretty convincing to me.  It never quite reaches the insane heights of something like Predator, but it does match the realistic tone of something like We Were Soldiers, and the violence levels place it a bit under Rambo for realism’s sake.  It’s a healthy balance that allows for you to grow fond of the team, while still worrying about whether or not they’ll make it out alive. 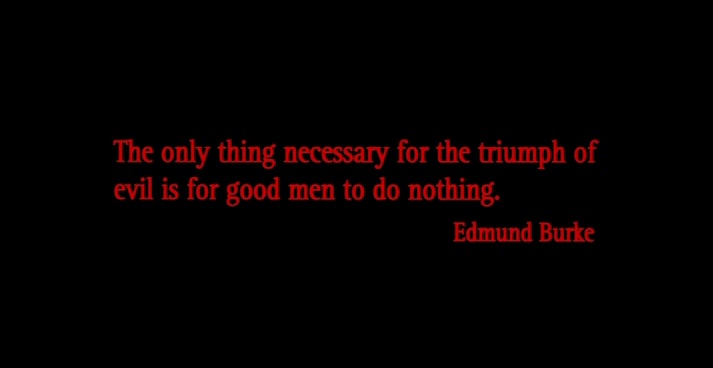